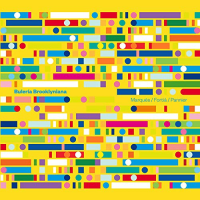 In Bulería Brooklyniana, the mystery and magic of flamenco music stews in the melting pot that is New York. It's a project that speaks directly to the form's rhythmic graces, European bearing, and mystical charms while also highlighting the flexibility and vision of a dynamic Franco-Catalan trio with a foothold in the Borough of Kings.

Heading into Barcelona's Laietana Studios after a ten-day tour of Spain in the summer of 2017, pianist Albert Marques, bassist Manel Fortia, and drummer Raphaël Pannier laid down a set of songs which speaks both to chemistry and individuality. There's a loose and limber quality at play, lending the music an air of uncertainty, but these three remain keyed into each other regardless of the state of gravity. Opener "Abraham Lincoln Brigade" proves to be the perfect example of this free-tight dynamic. The trio capably builds to a crescendo as one potent force, but breathing room proves to be a key factor when Fortià solos. The strict time of the ascent and the open landscape that appears elsewhere may initially appear at odds with each other, but these three ably dial back and forth between the two ideals.

As the first half of the album unfolds, roles tend to solidify across this unit. Marquès plays as the prime motivator, shaping each angle and idea from the bench; Fortià drops guideposts, marking turns and grounding the journey(s) while adding the occasional weighty statement; and Pannier proves to be the provocateur, pushing the envelope, driving the band into a frenzy, and exhibiting a mercurial glee through his stick work. But just when it feels like these three have, to a certain degree, defined their places, the music reorients itself, altering the aforementioned perspective in the process. The balladic "Haden Song," presumably a nod to bassist Charlie Haden, finds Fortià controlling the sound, Pannier playing on subtleties, and Marquès sewing seams. That number, more than any other on the album, demonstrates the expansive nature of each musician and the depth of expression possessed by the collective entity.

This trio tends to paint its image through original music, but by closing the album with two covers these men are able to shrewdly demonstrate their ability to absorb and reflect their influences. Chick Corea's "Sea Journey" fits this band like a glove, playing to Spanish heart and driving spirit all at once. It remains in line with its original intentions while calling on a somewhat youthful energy to fuel its travels. Then Sam Rivers' "Beatrice," an outright standard, beckons with warmth of character while taking on new dimensions in these six hands. It doesn't seem a likely choice on the surface, yet it feels right at home flying a slipstream from Spain to NYC with this crew.