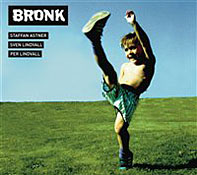 Three people lay claim to having created that seldom heard musical phenomenon, Swedish funk. They are: most famously, former Abba drummer and Formula 1 racing driver Slim Borgudd; jazz trombonist/vocalist Nils Landgren; and dance band leader Yngve Forsell. All three made an impression locally in the 1970s and '80, but now with this, their second album, pupils Bronk make a bold effort to bring the genre up-to-date, attempting to propel it into the international arena by enlisting American blues singer Eric Bibb.

The individual members of Bronk, while unknown further afield, are familiar figures on the Stockholm scene, laying claim to being the Swedish rhythm section and playing with local and visiting members of the rock and pop elite. Now Bronk is doing its own thing, composing all but three of the songs featured on Bronk 2.

There's a nice laidback feel to the proceedings, with some strong grooves generated— none more so than by guitarist Staffan Astner on the opening "Mr Collins." Astner stretches out on "Zombie," underpinned by some nice bass lines from Sven Lindvall, before showing what he can do melodically on "Basse."

Bibb's feature, the love song "Proper Lady," co-written by the singer and Astner, brings things back to the mainstream and features a good workmanlike vocal, though it unfortunately comes to a bit of an abrupt end.

J.J. Cale's "Tahiti" features a vocal by Bengt Skogholt, previously best- known in Sweden as a dubbed voice on the Swedish version of two Disney movies, The Many Adventures of Winnie The Pooh (1977) and Treasure Planet (2002). Astner puts in some good, economical work here before taking off in sub-John McLaughlin fashion on "MiR."

"Greasy" is more free and easy, perhaps a little too much so on occasion. By contrast, "Let's Straighten It Out" is a conventional soul ballad, featuring a vocal by Sven Zetterberg, a former postman who's now an established figure on the Swedish blues circuit. "Ajö, Ajö" means "bye bye," and acts as a showcase for the Lindvall Brothers—bassist Sven and drummer Per. Once more, there's a rather abrupt ending, almost as if no-one knew quite how to bring the number to a close, so at a given point everyone simply stops playing.