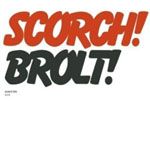 First impressions may be lasting, but they're sometimes not as all-encompassing as they should be. Scorch Trio—the Norwegian/Finnish power trio featuring guitarist Raoul Bjorkenheim, bassist Ingebrigt Haker Flaten and drummer Paal Nilssen-Love—may appear to be a pedal-to-the-metal improvising power trio, a sense supported by Luggumt (Rune Grammofon, 2004). Still, over the course of three albums culminating with Brolt, the trio's electrified form of free improvisation reveals far more at work than a group simply flailing away with reckless abandon.

The best free improv still possesses shape, and Brolt's six pieces all possess a certain logic, even as the trio creates dense soundscapes from unfettered collective spontaneity. "Olstra" begins as a blistering duet between Bjorkenheim and Nilssen-Love that recalls the more liberated, skronking explorations of guitarist Nels Cline. But, like Cline, there's more here than meets the eye. Bjorkenheim's lines are structured around specific harmonic concepts, jagged though they are; when Flaten's heavily processed bass enters a third of the way into its ten minutes, it doesn't exactly settle Nilssen-Love's vicious turbulence, but it does focus it, with an actual groove and spare motif emerging to keep the piece constrained within its loosely structured framework.

Scorch Trio may lean towards improvisation's harsher edges, but it's not a relentless, flat-out sonic assault. "Basjen" begins with Flaten's growling bass, recalling 1970s-era King Crimson and its thundering bassist John Wetton. But Nilssen-Love's subtler, albeit still industrial-tinged percussion works alongside Bjorkenheim's electric viola da gimbri (which is either a typographical error meaning it is the 15th century viola da gamba, or it is a bowed hybrid of the Moroccan three-stringed, lute-like gimbri) to create a more ethereal interlude before Nilssen-Love reenters, maelstrom-like, on "Hys," where the angular rock stance of Bjorkenheim's free play leans towards a blues-centricity suggestive of how power trios like Cream might have sounded had their emphasis been on completely free improvisation, rather than long, vamp-like jams.

Dark though it is, "Gaba" approaches the closest thing to beauty on Brolt, though it ultimately turns into another tumultuous piece of spontaneous invention, with Bjorkenheim's viola da gimbri the dominant voice. But when Bjorkenheim returns to guitar on the seemingly anarchistic "Graps," he once again demonstrates that, as extreme as his playing can be, it's more than simple catharsis—based, instead, around spartan ideas that provide context for the entire trio.

If Hendrix had a more extensive language, if Terje Rypdal had stuck with his freer playing on Jan Garbarek albums like Afric Pepperbird (ECM, 1970) and if Nels Cline were to possess an indescribably palpable Nordic edge, then you might have a fair approximation of the sound and approach of Raoul Bjorkenheim. But despite the dominance of the guitarist's voice in terms of motivic development, make no mistake: Scorch Trio is a democratic collective, and the contributions of Flaten and Nilssen-Love are equally definitive in sculpting the raw, assaultive and viscerally cleansing sound of Brolt.