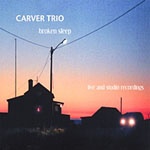 Here in the UK, roughly once a year, an album emerges from the cross-genre margins with enough novelty appeal to attract a mainstream audience and enough integrity to interest jazz listeners. Last year it was the Portico Quartet's Knee Deep In The North Sea (The Vortex, 2007), whose novelty appeal came with the inclusion in the line-up of two hangs (Swiss-born offspring of a Balinese gamelan gong and a Chinese cooking wok), and whose depth was provided by the quality of composition and improvisation. This year it could be the Carver Trio's Broken Sleep.

The novelty this time lies not so much in the instrumentation—although Nathan Riki's Tanzanian filimbi flute, heard unaccompanied on the four "Breathe" tracks, is hardly standard fare—but in the manner the accordion is played by Luke Carver Goss. Forget the usual either/or of tango-inspired melancholy/Balkan bacchanalia; Goss's default groove is a mellifluous, soothing balm which instils a feeling of calm and contentment. It's also rich in surprise and musicality, light years away from the bland noodling of ambient music (which through a closed door, while you're cooking dinner perhaps, some of it might superficially resemble).

Unveiled in 2005 at the Manchester Jazz Festival, at which three of the tracks here were recorded, Goss, Riki, who is mostly heard on double bass, and guitarist/mandocellist Dylan Fowler present a sonorous blend of jazz and British and European folk and chamber musics (all but two of the tunes are originals) and lyrical improvisation. Goss' "Broken Sleep," "Simone," and "Song" are perfect little masterpieces of romance and happiness and with other tunes in similar vein define the album.

But as befits the album's title, the mood gets darker on occasion, and quite chillingly so on the collaboratively written "Six Passages" and "Lullaby." Inspired by memories of a French crossroads at night-time, "Six Passages" is fitfully as spooky as the fabled crossroads at which guitarist Robert Johnson is said to have made a pact with the devil; it sends shivers up the spine. "Lullaby," which features some compelling Wes Mongomery-ish guitar from Dylan, is, that aside, more likely to conjure wraiths than the sandman. Perhaps only the straight-ahead folk reading of the traditional "Rose In June," a song popularised by the singer June Tabor, offers undiluted pastoral bliss.

The bleaker moments provide contrast and astringency to Broken Sleep's general vibe, but powerful as they are, don't subvert it. Here is a masterly evocation of the peaceful side of life, a restoring antidote to angst.