Home » Jazz Articles » Our Latin Groove: Bringin’ It All On Back!

Our Latin Groove: Bringin’ It All On Back! 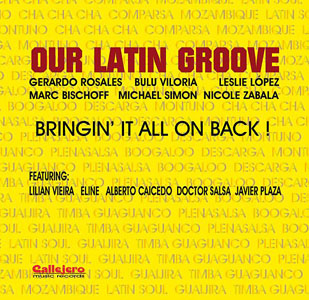 Percussionist Gerardo Rosales' production resembles a piece of roughhewn North Carolina outdoor mountain cabin furniture: solid, durable, attractive, functional...and just plain charming. Under the moniker Our Latin Groove, paying homage to the heyday of the Fania label and the film production Our Latin Thing, the group courageously avails itself of neglected '60s Latin/New York musical styles when the boogaloo, the shingaling and their cognates had their limelighted time, as well as the ruling '70s period of salsa. The results are fun, nasty, and very danceable.

One of the highlights of Bringin' It All On Back! is its tip of the hat to lesser-known figures such as Joey Pastrana, Bobby Rodriguez and La Compañía (the only salsa musician who modeled his band sound after blues, Dixieland, funk and doo woop; producing but a few records but permanently marking his territory). "Recuerdos de Arcaño," itself a reverent tribute to Antonio Arcaño—a Cuban musician of note from the '30s and '40s—follows Rodríguez's swinging version very closely, featuring flute, trumpet, trombone and piano solos with a tight and steady percussive backbeat as support. Rosales performs on timbales and cowbell, following the unique and economic style of Charlie Salinas, La Compañía's timbalero.

Joey Pastrana was a band leader and timbale player much more successful than Rodríguez as a crossover musical figure, thus the subject of envy and derision from unthinking purists, as well as spiteful and failed crossover wannabes. Pastrana, Rodríguez, and many others came up with ingenious bilingual (and truly multicultural) reinterpretations of material ranging from Al Jolson to R&B. Our Latin Groove features a couple of scorchers, celebrating Pastrana's legacy: "Tribute to Joey Pastrana"; and "Cosas de la vida/Chaca-Boo/Malambo."

Our Latin Groove displays plenty of musicality, musicianship and good ol' heat as it delves into various genres, tempos and styles: El quinto habla" is a guaguancó; "Boricua's Groove" a plena;" "The Salsamba" is Brazilian salsa, interpreted in Portuguese; "Gira y gira" a slow-yet-swinging son montuno; "Buenos días, Good Morning" is a heated comparsa, dealing with the travails of having a Venezuelan breakfast in New York; and "My Shingaling" is a finger-snapping New York shingaling.

Our Latin Groove did did bring it all back!

Title: Bringin’ It All On Back! | Year Released: 2011 | Record Label: Callejero Music