By GLENN ASTARITA
December 17, 2017
Sign in to view read count 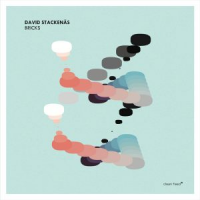 Hailing from Sweden, David Stackenäs (Per Zanussi Ensemble, Lina Nyberg Band) may be one of the best lesser-known global guitarists out there. Active in jazz and experimental ensembles in Europe and beyond, the artist follows up his previous solo acoustic guitar outing Separator (2009, Found You) with a cunning and at times, mesmeric exposition. In the album notes, iconic guitarist Nels Cline extolls glowing praise via his detailed analysis of certain tracks and narratives concerning Stackenäs' striking technical gifts and shrewd imaginative powers.

When Stackenäs' is performing outside the box, and largely executing nimble, intricate or vastly complex phrasings, he embeds tangible themes and melodic intervals into the mix, which is a huge plus. The guitarist uses closed hand techniques with reverse engineering processes and designs motifs with stilted cadences and variegated tunings. Along with speedy single note licks and clustering chord passages, Stackenäs transparently imparts unconventional methodologies with a penchant for coherent storytelling.

On "Paramo," the guitarist injects an ethereal passage that is somewhat off-kilter by design, as he fuses introspective qualities with subliminal noise-shaping treatments. Moving forward, the artist conjures imagery of unsettling occurrences, tinted with subtle use of electronics, elongated tonal patterns, fervent strumming, and a horde of enticing contrasts to round out a truly captivating sequence of musical events.

The final track "Morioka," boasts a hypnotic vibe due to Stackenäs' twirling chord progressions, taut thematic constructions, and fluttering grooves, rendered with an airy gait and surreal overtones. Shortly after inserting this disc into my CD unit, it didn't take long to detect that something very special was taking place.