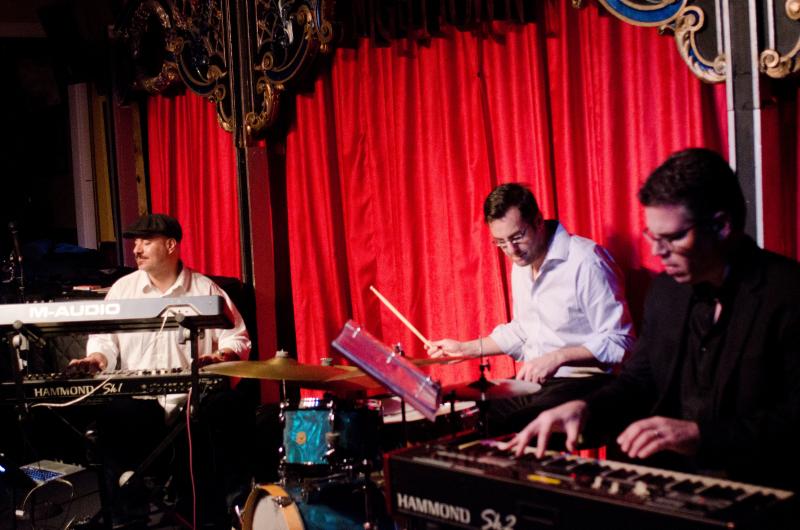 It's not often that you get the chance to hear two organists going head to head in a live setting. Jimmy McGriff and Richard "Groove" Holmes did it, but few others have dared to tread in such territory. Nonetheless, if New York heavyweight Brian Charette and Michigan marvel Jim Alfredson have anything to do with it, we might see a new precedence set for such an encounter. The pair first crossed path back in 2014 and have since enjoyed the benefits of what they call "four-fisted, double Hammond organ madness."

The duo's recent six-city tour brought them to Nighttown in Cleveland for an outstanding performance that also highlighted the talents of drummer Jordan Young and tenor saxophonist Benny Sharoni. Although travel and space constraints prevented the use of vintage B3s, Charette and Alfredson put together digital rigs that nonetheless captured an authentic sound, with the former using a Hammond SK 1 pumped through a guitar amp and the latter using the SK2 and a modern day Leslie. Charette also used his laptop and numerous patches to conjure up all sorts of imaginative textures and timbres.

Charette's own "Conquistador" opened the set with its resourceful use of shifting grooves and harmonies. Its composer later noted that while its title conjures images of Spanish origin, the piece is based on Hungarian scales. From the get-go, the duo managed to establish a comradery that benefited both the overall sound and approach to the arrangement and solos. Jordan's fills and cymbal patterns propelled things along discerningly, while his vintage Gretsch kit delivered enough punch and bottom-end to compete with Alfredson's Leslie.

Utilizing an arrangement not unlike Blue Mitchell's from the trumpeter's 1966 Blue Note date Down With It, the quartet would boogaloo through several choruses of "High Heel Sneakers." Alfredson's solo was full of high octane runs and flourishes, a particular triplet figure at the conclusion picked up sagaciously by Jordan for his own development. Sticking with the Blue Note cannon, Hank Mobley's "This I Dig of You" was taken at a fast clip and featured Charette's fleet-fingered runs, not to mention a highly musical statement from Young.

Charette's sense of humor was evident in his charming banter between numbers. Introducing his original "Excellent Taste," he recalled an encounter with an attractive member of the opposite sex that somehow ended up going south. The piece itself was a lilting waltz with strong harmonic movement, not unlike some of Wayne Shorter's prettiest ballads. Charette tapped into a vibraphone sound at one point, choosing his patches wisely.

Another Charette original, "Time Changes" provided challenging fodder for the cast with its shifting grooves. Saxophonist Sharoni skillfully ate up the changes with a particularly strong boppish statement. By contrast, his delivery on the ballad "Everything Happens to Me" was all warmth and sentiment, balanced nicely by Charette's strong vocals. Wrapping things up, Lalo Schifrin's "The Cat" put the pots on for a blowout involving all hands on deck. As with the entire evening, it wasn't so much of a cutting contest by the two organists, but a communal sense of music making that managed to allow both musicians to shine. Hopefully, there will be more organ madness to come from these two in the future.