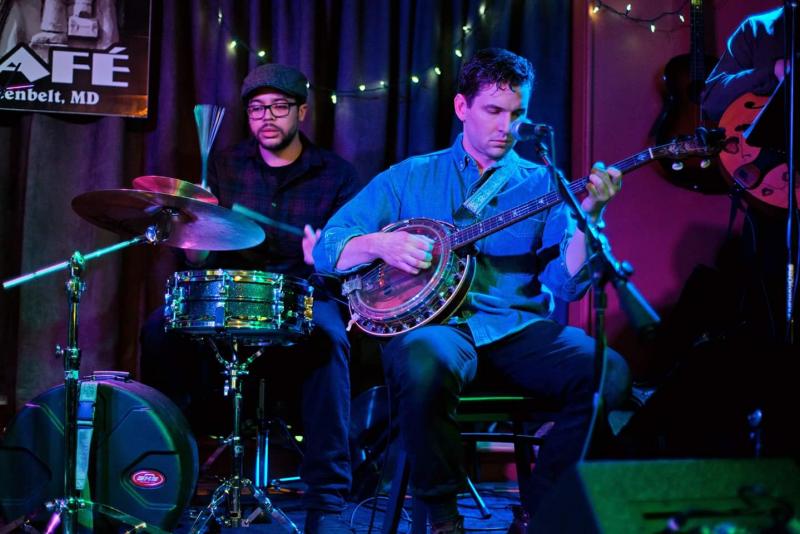 By Zachary Serleth
October 26, 2016
Sign in to view read count
About Zachary Serleth
Primarily a bassist and banjo player, Zach Serleth has developed a deep love of vintage music that is reflected in his current band, Tongue in Cheek. The group's 2016 album, Mobtown Strutters Ball, pays tribute to the New Orleans jazz tradition, covering tunes written from 1910 to the mid 1930s. Serleth has delved into many traditions from Appalachian blue grass to gypsy jazz. He and his partner, vocalist Bridget Cimino, have a penchant for re-discovering long-forgotten songs and reinventing old favorites.

I knew I wanted to be a musician when...
I would attend practices of the jazz band of my childhood friend's father. They would play all sorts of tunes from the Bill Evans repertoire, and my only reaction I could muster when listening to them was laughing hysterically while rolling around the ground in pure joy. Once I saw the connection and beauty that can happen when musicians play and improvise together, I knew this is what I wanted to do for the rest of my life.

Your sound and approach to music.
My sound can be described as Django Reinhardt as if he grew up in New Orleans playing in Dixieland bands. The musical concepts of Django Reinhardt and Gypsy Jazz are deep within my blood, and no matter what style of music I play, there will always be a tinge of those sounds. The American jazz and bluegrass music has also always been in my life, shaping my sound with drive, virtuosity, and a danceable feel. People from all walks of life can relate to my sound as I touch on so many genres when I play.

Your teaching approach
This can be summed up with the phrase, "fake it until you make it." Meaning, you have to play—you have to play as much as possible with the best musicians you can. Doing that is what brings a student of music up to speed so much more quickly, and while I can show a student tips, techniques, and musical etiquette, the best place to learn will always be on the band stand.

Your dream band.
I dream of a band of seven or eight people committed to creating a sound that has roots in tradition but that has never been done before—a combination of Balkan, Dixieland, Django, and Bluegrass all in one.

Road story: Your best or worst experience
The first time Bridget and I went to New Orleans, we had no idea what we were up against. We figured we could just busk on the street anywhere and get ourselves a gig. Well, the opposite happened—we didn't understand street performer etiquette at all and many times were chased down the street by street musicians. It took us FOREVER to find a spot where we could play and people would listen to us. Eventually we did, and we got a great response! We even made enough to cover our dinner for the night.

Favorite venue
My favorite venue to play locally is Gypsy Sally's. I love that place—they treat the performers extremely well. With food and beer in the back, the green room is very comfortable, and the sound technicians are super responsive. Dialing in the right sound and being comfortable on stage is so easy there. Not to mention, the crowd is always fantastic.

Your favorite recording in your discography and why?
My favorite recording in our discography may have to be our first one, Taint No Sin. This single piece took eight hours to record. The band and I worked tirelessly on the arrangement and came up with a really creative version of the song. Taking inspiration from orchestras from the 1920s, we added complicated horn lines and quotes from other songs. In the middle, we break it down for a glockenspiel solo playing the "In the Hall of the Mountain King" melody, which builds up to a Dixieland shout before the final chorus. The intricacies of this recording make me think it may be the best version of the song on the internet today!

What do you think is the most important thing you are contributing musically?
Preserving the old traditional jazz numbers that nobody plays any more. There are trumpet players from the 20s who were always overshadowed by Louis Armstrong's fame, and I work hard to find these people, transcribe their best songs, and preserve them in our band. People like Jabbo Smith, Bunk Johnson, and Sam Morgan all had great traditional tunes back in the day, but most people have never heard these songs. We work to preserve and recreate these songs on every record.

Did you know...
Before playing traditional music, I played super modern prog rock and electronica music with bands like MIND, Robotapotamus, and Reading in Circles.

The first jazz album I bought was:
Kind of Blue, just like everybody else. I heard the bass line for "So What" and was sold. The second I heard that record, I knew that going forward, I wanted to play jazz.

How would you describe the state of jazz today?
Versatile. There are so many different kinds of jazz now and so many people playing them. Swing Dancing is coming back with a vengeance and so is the music that goes along with it. On the other side however, modern jazz continues to be innovative and adventurous. I think were long overdue for the next Miles Davis—soon there will be a breakthrough to the next style.

What are some of the essential requirements to keep jazz alive and growing?
Jazz fans must go out to hear and support their local musicians, purchase recordings of their favorite jazz players, spread the word, and play the music. It is important to preserve the music that most people will never hear and expose them to it.

What is in the near future?
Our first album is being released on November 4th at Creative Alliance in Baltimore, and we are very excited about that. We had a great horn lineup for the recording and are very proud of the CD. We play a fundraiser at the One World Coffeehouse in Columbia, MD on November 19, and we are back at Germano's on January 17, 2017 for a Burlesque show. We hope to book tour dates next spring/summer and start gigging in Philadelphia and New York more often. We recently added a really amazing violin player to the band, and we are working up a new repertoire with him and are excited for the new sounds we will employ.

What is your greatest fear when you perform?
I guess it's not being fun and entertaining enough. Sometimes I get so caught up in tradition and the history side of the songs that I forget that people really listen to music to dance and party. I need to remember that side of it when I play to certain crowds.

What song would you like played at your funeral?
"If you want the Rainbow, You Must Have the Rain" [Lyrics by Billy Rose and Mort Dixon; Music by Oscar Levant]. Or "Don't Worry about Me" [Words and music by Sophie Frances Cooke]. Both are beautiful tunes about how everything is going to be all right.

What is your favorite song to whistle or sing in the shower?
"Ramshackle Shack" [AKA "Sparkling Brown Eyes"] by Jeremy Stephens and Tom Mindte, can't help but sing that one!

By Day
Public Health Policy Research for the Centers of Medicaid and Medicare services.

If I weren't a jazz musician, I would be a:
Farmer.