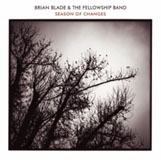 It's been eight years since drummer Brian Blade released the outstanding Perceptual (Blue Note, 2000), his last release with his Fellowship band. While much has changed, from the first notes of Season Of Changes' opener, the potent, mid-tempo groover "Rubylou's Lullaby," it's also clear that what gave Fellowship its immediately recognizable sound has remained intact.

Blade was an increasingly ubiquitous up-and-comer in 2000, having already clocked up significant credits in and out of the jazz sphere with artists ranging from pianist Brad Mehldau and saxophonists Kenny Garrett and Joshua Redman to singers Bob Dylan, Joni Mitchell and Marianne Faithful. Since then he's been part of the forward-thinking improvisational quartet that's put saxophone legend Wayne Shorter back on the map, and continued to contribute to stylistically multifaceted albums including Shorter's unfettered Beyond The Sound Barrier (Verve, 2005), Redman's groove-centric Momentum (Nonesuch, 2005) and keyboardist Sam Yahel's revelatory Truth And Beauty (Origin, 2007).

While the name has changed from Brian Blade Fellowship to Brian Blade & The Fellowship Band, it's the same line-up that recorded Perceptual except, with the departure of pedal steel guitarist Dave Easley, it's now a slightly more compact sextet. In the intervening years, guitarist Kurt Rosenwinkel has, like Blade, delivered on the promise of his earlier work to become one of the most influential guitarists of his generation, most notably on the exceptional The Remedy: Live At The Village Vanguard. Why greater exposure has eluded keyboardist Jon Cowherd—as before, Blade's co-producer and, here, even greater co-contributor to another set of all-original material—is a mystery, but once again Cowherd demonstrates that, in many ways, the markers that define The Fellowship Band belong to him as much his as they do to Blade.

The twin-horn frontline of Myron Walden (alto saxophone, bass clarinet) and Melvin Butler (tenor saxophone), is another definitive. The two mesh so synchronously that together they create a denser, more singular sound when playing melody, but are equally capable and individual as improvisers of strength and subtlety. Cowherd's "Return Of The Prodigal Son" begins in elegant lyricism, but quickly morphs into a modal workout for Rosenwinkel, whose softly overdriven but viscerally sustaining tone drives a solo of gradual but relentlessly increasing power. Butler's solo is equally potent, seamlessly working in, out and around Cowherd's accompanying changes before the tune moves into a nearly three-minute coda that demonstrates a Pat Metheny/Lyle Mays-like complexity hidden beneath an accessible veneer.

Cowherd and Walden make the melancholy and aptly-titled "Improvisation" a four-minute exploration for pump organ and bass clarinet evocative of a deep spirituality that's always been a foundation for Fellowship, even at its most intense. It segues into Blade's "Alpha And Omega," a more structured, minor-keyed miniature of dark tranquility that sets the tone for the album closer, "Omni," where a rubato intro finds Cowherd sinuously improvising beneath a twin-horn/guitar melody. When the rhythm kicks in, it's a deceptive waltz time where bassist Chris Thomas creates the anchoring pulse while Blade's tumultuous playing pushes Walden's alto solo to greater heights, before settling down for a brief interlude from Cowherd that tinges a folkloric lyricism with hints of blue.

As much as the improvisations help define Season Of Changes, so too does Blade's appreciation of simple song form. There's little improvisation on the bittersweet "Stoner Hill," but with its modest changes, relaxed backbeat and harmonically bolstered themes, it's not hard to imagine it adapted as a lyric-driven alt-country ballad. Blade's "Most Precious One" begins with a persistent bass pulse and introductory solo from Cowherd, but when the group enters, it becomes another thematically rich song that segues into "Most Precious One (Prodigy)." Blade's thick backbeat and Cowherd's electronic textures on Moog drive Rosenwinkel's heavily processed guitar, making it the only track to overtly concede that much has happened in the sphere of music since Perceptual—and that the members of The Fellowship Band have been listening.

As much as Blade's loosely expressive playing defines any project with which he's associated, it's the combination of transcendent but never invasive spirituality, the writing's blend of horns and guitar into a uniquely identifiable texture, and the group's ability to be at once melodically direct and improvisationally sophisticated, that creates that unmistakable sound instantly apparent on Season Of Changes. Welcome back Brian Blade & The Fellowship Band; let's not wait so long for the next release, please?