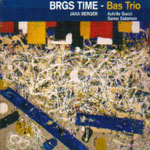 There is a certain rough-hewn directness in BRGS Time, the extremely interesting and challenging debut recording from drummer Jaka Berger. Berger is described by his compatriot Samo Salamon as a self-taught musician, which means to me that he has not allowed schooling to trample his originality.

While ostensibly led by Berger, the session is actually a group effort by Berger, Achille Succi and Salamon (who have recorded together on Salamon-led albums including Kei's Secret). Of the ten tunes, seven were written by Berger and Salamon, plus one by Berger and two by Salamon.

The balance and interplay of the unique instrumentation are easily heard on this well-recorded disc. Berger is naturally very exposed, and he ends up being more of a melodic percussionist than merely a rhythmic timekeeper. He manages to balance his purely rhythmic duties with a role as a "melodic voice that is both independent and in constant interplay with Succi's reeds and Salamon's guitar.

The tunes, regardless of their author, each evoke a particular emotional space that the group explores as the track evolves. The material is less made up of traditional melodies than motivic phrases that serve as grist for the playing that is passed around. Salamon uses a hard, somewhat distorted tone most of the time, which helps ensure a feeling of directness and action. As the only chordal player, he also balances the dual roles of harmonic color and support, also soloing and playing lines in response to Succi.

It would be easy to say that Berger and Salamon provide the glue that allows Succi to range freely on both bass clarinet and alto saxophone. While this is often true, Succi also manages to play a supporting and additive role. How much of this is scored versus due to personal initiative is unknown to me, but the feeling constantly floats between the two poles.

Indeed, the constant interplay among all three players is the defining characteristic of BRGS Time and what makes it such an interesting listen. One's ear is continually drawn from one layer to another and then outward to the entire sound as each track progresses, creating a whole that is much more than the sum of the parts.

While I characterized Ernesto Cervini's Here as a real "drummer's record," Jaka Berger shows himself to be more of a percussion-oriented composer. BRGS Time has an recognizable sound that is created by all three quite original players, and thus will repay time spent listening many fold.