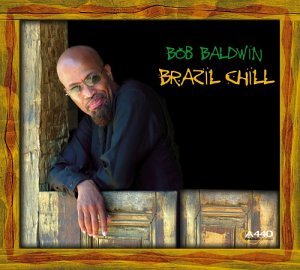 The music of Brazil has always tempted smooth jazz musicians. It can be sexy, dreamy, rhythmic, soulful, sexy and even more sexy. Pianist Bob Baldwin traveled to steamy Rio de Janeiro to record Brazil Chill, which is all smooth jazz and shouldn’t be confused with “chill music.”

It’s in Brazil that Baldwin recruited some of the country’s best players, including the great saxophonist Leo Gandleman, guitarist Torcquato Mariano, percussionist Café and others. Baldwin is alternately jazzy and smoothy. The beauty of Brazilian music is expressed many times, but nowhere more so than “Manhattan Samba,” lovingly executed with Baldwin’s expressive and wordless vocalese, his jazz-steeped piano runs and a grooving samba beat. Ditto for “Cafezinho,” which is named for Brazil’s famous morning staple, a small, hot cup of rich espresso.

The famous sunny disposition of Rio’s cariocas obviously impressed Baldwin, who has Brazilian singers exhorting about how “Everybody’s Beautiful (in Brazil)” and the title track, where Baldwin breaks up the pretty acoustic sounds with an electric keys solo. The first radio single, “ I Wanna Be Where You Are,” is a pretty ditty with a memorable piano hook.

Although you'd be tempted to tip your hat to Baldwin for not sneaking a Jobim classic onto “Brazil Chill,” a standard would have cemented that Rio feeling. As it stands, “Brazil Chill” as a perfect way to get a tropical rush without leaving your music system. If you're reading this from Rio, you're already there.

Baldwin has come a long way from just a few years ago, when he named an independent CD Bobbaldwin.com to driver listeners to his site . These days Baldwin is a force to reckon with in smooth jazz, and here has released one of the best CDs of the year.

In addition to All About Jazz, Brian contributes to JazzTimes, smoothvibes.com, Smooth Jazz News, and SmartJock.com.