By Jason Crane
September 22, 2006
Sign in to view read count 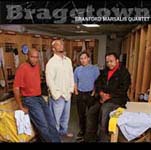 From the opening anthem, called out on the unaccompanied saxophone by a swaggering Branford Marsalis, you know that Braggtown is going to be a ride. And when Jeff "Tain" Watts explodes on the cymbals a few beats later, you know the ride is going to be in a fast car on a winding mountain road. This is jazz that makes your hair stand up on the back of your neck and your head move involuntarily, pulled back and forth by the propulsive rhythms and the commanding compositions.

Sting. There, it still needs to be said and remembered. This is not only the Branford Marsalis of the bleeding edge, the conductor of Crazy People Music (Columbia, 1990). Nor is he merely the product of New Orleans or prince of the royal family of jazz. He may be those things, but he's also the saxophonist who made Sting's Bring On The Night (A&M, 1986) the funky and fantastic pop album it was. He's still the guy who said, and I paraphrase, that Sting's Blue Turtles could kick the ass of any band out there. And he brings that kind of fire and engaging accessibility to Braggtown. Like Michael Brecker before him, Branford has assimilated the best aspects of pop and jazz saxophone playing into a smart, muscular whole that, as the man said, tends to kick some serious ass.

The centerpiece of the recording is the band as a unit. These four men have been together for years, and it shows in the way they follow each other through the tunes, and in the way they're not afraid to strike off in unexpected directions, sure in the knowledge that the others will follow. In this lean financial age when a working band is often hard to maintain, it's refreshing to hear a sympathetic and obviously content group at work.

That's not to belittle the individual contributions of Marsalis, Watts, pianist Joey Calderazzo or bassist Eric Revis. Calderazzo sounds inspired throughout the recording. His own tune, "Hope, is a glistening gem that would fit perfectly during the saddest section of a film noir classic. Calderazzo has a wonderful touch at the piano; he's the rare player who sounds equally at home tearing through a barnburner or tearing up during a tender ballad.

Watts is also a joy to listen to, having stepped firmly into the front line of modern jazz drummers over the last decade. Listen to Watts and Revis lay down the complex yet undeniable groove on "Blakzilla, a tune whose title alone forces you to take your game to the next level.

If there's one quibble about the album, it could be that it features one ballad too many. But that's only my opinion, and not meant to say that any of the ballads fail to merit inclusion on this remarkable record.