BY MATT MARSHALL
December 28, 2008
Sign in to view read count 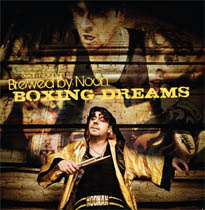 There's a solid history of jazz supplying the soundtrack for boxing. In fact, Jack Dempsey, and boxing in general, was one of the sporting kings of the jazz age. But while Miles Davis gamely tried to string boxing along as he pushed jazz forward, both art forms have seen better days—in terms of popularity—than those they now find before them.

Thankfully, Sean Noonan hasn't gotten the notice of surrender. The latest offering from his Brewed by Noon outfit finds the group energetically hoofing it to Boxing Dreams that stir Celtic and African blood in a sweaty gym of American noise, even when paying tribute to an Italian heir like Rocky Marciano.

With songs derived from the lyrics of ancient Gaelic poems and sprung by African beats, Noonan and his crew have crafted a spirited, worldly music that hits with the "Susie Q" bop of a Marciano right (or crash of a forearm trailing behind his left hook)—hard and sneaky like that. From the thunderous "Courage," driven by Afro-Celtic howls and Marc Ribot's fuzz guitar, the group skips into "Morpheus," a perky pop number that The Cranberries might have produced if they'd sung in their native Gaelic. Likewise, the album highlight, "Big Mouth," jumps through the vocals of tribal dance before tripping into a light Irish reel.

True to the flame-streaked gloves and trunks he dons for the CD's cover and liner photos, Noonan's drumming is consistently of the go-for-broke-each-round variety. It drives the distorted punk-country-metal barrage (if you can imagine such a thing) of guitarists Ribot and Aram Bajakian. Mat Maneri's viola also features prominently and serves to bridge any gaps this ethnic and genre-bending music encounters on its path between the lyrical and explosive ("Story of Jones"), the path that is boxing itself.

Noonan never lets his corner rest, but goes full out for 11 "rounds" (as he terms his compositions). The affair doesn't reach a twelfth and final round, so Noonan fans approaching this new work can safely assume their champion scores a knockout.