By NENAD GEORGIEVSKI
April 30, 2016
Sign in to view read count 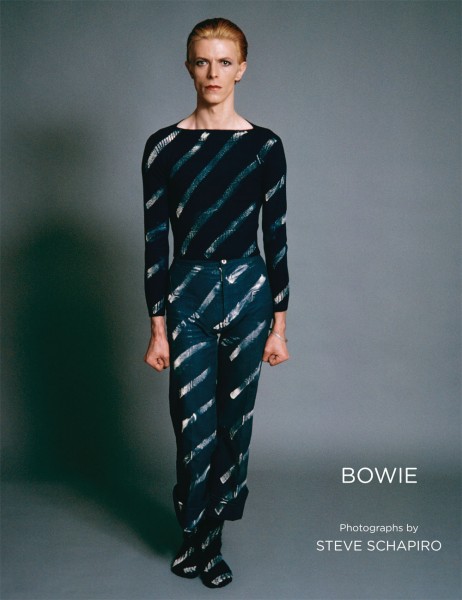 One thing is for certain, in his work, be it lyrics, visuals or music, singer David Bowie almost never embraced clear meaning. A one-man melting pot for ideas, his whole persona was so inventive and strange that it made people so fun and sometimes so hard to keep up with him on the path of his artistic adventures over the years. When Bowie died suddenly at the start of 2016, just two days after releasing the outstanding swansong Blackstar, (Columbia, 2016) fans began dissecting the songs and the images for coded messages. The Internet was literally over-flooded with interpretations of any sort with people just looking for clues of what has happened. Nevertheless, the cryptic lyrics, the minimalist, but iconic Blackstar imagery and design, the accompanying videos were and still are powerful and provocative. These things still mystify people and are open for interpretation. In the aftermath of this tectonic event, it was evident that his creative burst was, simply put, ars moriendi or the art of dying. Infinitely curious, over the years, his artistry, which embraced mystery, imagination, and magic, was bolstered by his unabashed intelligence and has left a body of work full of intensity of emotions and invention, wit and depth that will keep fans and conspiracy theorists investigating and debating until time immemorial.

Bowie's image and personas, over the years, were carefully contrived both for the album covers and the musical performances. Each period was as enigmatic and alluring as his final chapter with a selection of images to follow. Probably the '70s era was when he was more mercurial, more daring and his images and personas had a menacing allure to them. It was a time when his ability to adopt and transform various roles was at its most extreme. Now, a segment of that remarkable period is being celebrated in a photo book by renowned photographer Steve Schapiro taken around the time of the infamous Bowie residence in LA in the mid-'70s. It's a period famous for its relentless creativity and highs which spawned albums such as Diamond Dogs, (RCA, 1974) Young Americans, (RCA 1975) and Station to Station, (RCA, 1976) but was also infamous for the lows, such as the insane drug intake and dabbling with magick.

This book contains Schapiro's well-known images of Bowie from that period as some have adorned the front covers of various magazines along with previously non-published ones. What began as a private photo session in 1974 soon turned into a working relationship which captured some of Bowie's most fascinating images from that era. Despite Bowie's renegade and menacing images from that period what comes out on these photographs is his wardrobe flair. There are formal portraits, intimate backstage and behind the scenes photos. Others are more stylish photographs that could easily be featured in a fashion magazine. Some even feature actual famous magazine covers like the well- known Rolling Stone magazine cover. There are shots of Bowie in candid moments or behind the scenes on location in New Mexico during the shooting of the cult favorite The Man Who Fell To Earth. This is actually the period before he created his next persona or the cold and distant Thin White Duke, but here he looks so relaxed and sometimes amused. 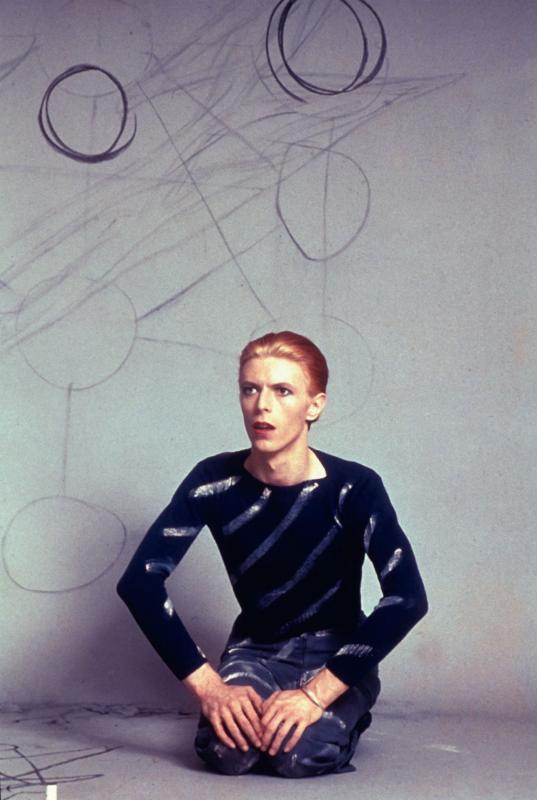 Bowie's interest in the occult is an intriguing subject and there is a nod towards that subject in the book's opening essay by journalist and musician Albin Wantier who quotes the infamous magickian Aleister Crowley. The maker of magick does not believe in the existence of accidents. The planet does not revolve, the rain does not cease, the illness does not set in unless some animate force wills it to occur. Bowie had a more than a passing interest in Egyptology, mysticism, black magick, the Qabalah, and there are photographs of him drawing the Tree of Life, that is central to the teachings of both Crowley and the Qabalah. Later, these photographs found their way on the record sleeves of Station to Station. Probably not a coincidence, but Bowie also wore the same suit with the stripes as on these photographs as for his last video "Lazarus" when he symbolically hid in the closet. A photograph of Bowie from the '70s wearing the suit also adorns the front cover of this book. This intriguing item is another clue for conspiracy forensics. The afterword by former manager Michael Lippman reveals that the stripes were made in the spur of the moment rather than by design.

Eventually, that lifestyle, the debilitating battles on the managerial and matrimonial fronts, had left Bowie with aggravated mental traumas. As a result, he was a fractured person, emotionally and psychically washed up and in need of reconfiguring his life. When he resettled in Berlin it was for the purpose of cleaning up and getting his act straight apart from the artistic reasons. Schapiro's photograph also adorns the cover of Low, (RCA, 1977) the first of the Berlin trilogy of records which along with the Station to Station cover, are photographs taken on the set of The Man Who Fell to Earth movie. Another photograph, where he is wearing a fedora and is drawing on a mirror, after four decades, will be put in a booklet of the career-spanning compilation Nothing Has Changed (Columbia, 2014)

As the photographs of him portray, Bowie was as astonishing and impressive visually as he was musically. In the aftermath of his death, it is interesting to think what he will come to signify to people that were born too late to experience how he influenced the culture, not only as a singer or an actor, but as a presence with all the contradictions and changes he so flagrantly embodied. This book was already in production while Bowie was still alive and the author and the publisher had his blessing. Schapiro's work can't be described otherwise than iconic and tell a story about an important chapter in the life of arguably one of the most photographed people ever.