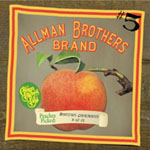 The latest Allman Brothers archive title, Boston Common 8-17-71, is not essential for either the devout Peach-head or the casually curious. But it will remind both the aficionado and the dilettante that the scintillating peaks scaled by The Brothers' At Fillmore East were nevertheless revisited fairly regularly.

The group brings an edgy energy---and, during the lengthiest improvisations, an altogether melancholy majesty—to a fairly standard set. The list of titles may look familiar but, then as now, hardly tells the story of the music itself. While the angular slash of guitars, guttural growl of voices and piston-fire interaction of drums isn't so polished as the famous Fillmore shows (recorded earlier that same year), cuts like "Statesboro Blues" make a case for The Allmans as the finest of all contemporary blues-rock bands.

Commencing with shorter tracks like "Trouble No More and "Don't Keep Me Wonderin,' The Brothers are building momentum. The former, a Muddy Waters song, illustrates how they remained true to their roots while, through Gregg Allman's' original material like the latter, ABB were expanding beyond those roots into a style they could rightfully call their own.

A formidable arsenal of skill within their ranks fostered that remarkable evolution. In addition to his role as second (!) lead guitarist, Dickey Betts was developing into a composer of significance, offering instrumentals like "In Memory of Elizabeth Reed that encouraged the jazz leanings of the band's firebrand leader/guitarist Duane Allman.

For his part, the older sibling extended the influence of seminal blues slide guitarist Elmore James, particularly during his solo forays on a twenty-six minute version of "You Don't Love Me. But it's the ferocious, fearless intensity of Allman's work on "Whipping Post where his genius is manifest. He leads the group through a tour de force from shuffle to light chording by way of bone-crunching riffs channeled from the British hard rock of the day.

Berry Oakley functioned as the nexus of the band. The bassist linked the interplay between drummers Butch Trucks and Jaimoe with the virtual telepathy of guitarists Allman and Betts. Would that more time had been spent on the tapes of this show to deepen and clarify the sound—the rhythm section virtually disappears at some intervals—but perhaps the source is just not sufficiently high quality.

This lack of detail in the sonics is ultimately no more of a shortfall than that in the cover graphics. Preceding ABB archive releases, even the first—which was released before The Allmans' new millennium renaissance—did not look this generic. But, as with The Brothers in their heyday, the music itself takes precedence over everything else. Boston Common 8/17/71 (available at concerts and the ABB merchandizing site) may not be the first or best place to find out why this band has created such a profound legacy, but it'll give you a good enough idea.