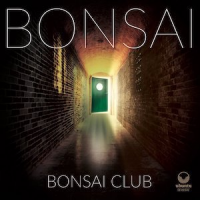 Bonsai, under their previous moniker Jam Experiment, released one eponymous and extremely good, self-produced CD in 2017. In their new incarnation, they have replaced saxophonist Alexander Bone with violinist / vocalist Dominic Ingham. (To avoid ambiguity, Dominic and trombonist brother Rory—winner of Rising Star in the 2017 British Jazz Awards—will be referred to as DI and RI in this review.)

Opening with "Bonsai Club," the vocals are the most noticeable aspect of the track. Efficient, but not spectacular, they are vaguely reminiscent of the studiously laid-back singing approach of Robert Wyatt, Hatfield and the North or, at a pinch, Hatfield's progenitor, Caravan. The angular, "The Crescent," with wordless vocals from DI, and a compulsive violin vamp, grabs the attention immediately with a strident trombone solo from RI and some equally exuberant vibraphone from Jonny Mansfield.

DI chants the vocals on the ethereal "Tin" in a limpid, high register, rendering it, to all intents and purposes, a prog song, albeit a commendably sophisticated one. The vocals on the languid "Quay," again very Hatfield-esque, comprise one single line ("We're all alone together, now") but are so low in the mix they're almost subliminal and used more as a soundscape "wash."

RI's resoundingly rumbustious trombone is a key component of "Itchy Knee," undoubtedly the album's apogee which is further enhanced by DI's impressively vibrato-less violin (it is surprisingly difficult for violinists not to employ vibrato, which can have a cloying effect if too freely used in jazz). The lively "BMJC" showcases a fluid, masterly violin solo from DI and "Hop -The Hip Replacement" features some excellent violin and trombone interplay. As a jazz fusion album, Bonsai Club succeeds on many levels and, most encouragingly, will introduce this quintet of talented musicians to a wider audience.