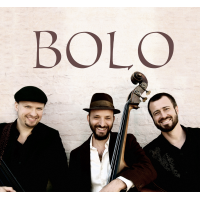 There is an ancestral vocation that devout musicians draw inspiration and bearing from. Once on this chosen spiritual path, they enter into a mesmerizing plateau of creativity which is only accessible through profound belief in the task at hand, and a complete mastery of their instrument. The multi-instrumental trio of Surya Prakasha, Evan Fraser and Eliyahu Sills, known collectively as Bolo, on their self-titled release, have taken a cross cultural musical odyssey into that space in time where ancient intonations and traditions merge into a modern yet organic sensibility.

Though this is not a record dealing with strictly religious music, there is a strong sense of spiritualism weaving throughout. "Xango," is a Yoruba prayer to the god of thunder and lightning from West Africa which has strong connotation in the Cuban Santeria religion. Prakasha chants his praises with conviction and the cadence rises to match the supremacies invoked. They cover Sanskrit scripts in "Sunshine," and pull from Arabic and Hebrew influences in "Greetings." As the trio can pensively change instruments at will, they offer a mixed bag of novel approaches to native music from the Middle East, India and Africa. "Kothboro," is an African tribal song, "Khol," stems from the Indian khol drum used in devotional music, and "Mahini Mei," is a song written by Malian guitarist Ali Farka Toure, whose influence is acknowledged and revered.

Evan Fraser has undertaken serious studies in ethnic music, and has acquired an individual approach to his ngoni playing covering both the kamala and bass kamala ngonis with virtuosic ability. Eliyahu Sills, not only handles the bass duties, but is a master on several types of indigenous flutes, as the bamboo bansuri from India, and the primordial Turkish nai. Surya Prakasha is prominent as the lead vocalist and drummer/percussionist with a flair for bringing the modern drum set into this ancient oriented music.

Bolo is an ensemble with a firm conviction to stay grounded and connected to the earth, and their music reflects a maturity of purpose. By their own admission they got into this music for its spiritual and humane connection, and have taken their mission into a sophisticated direction they call acoustic global groove. It is music that soothes the soul and relaxes the senses, that offers flowing tranquility and peace, what else is there.