By NENAD GEORGIEVSKI
May 15, 2009
Sign in to view read count 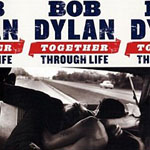 There is no overstating how important a Bob Dylan record is, old or new. His records don't just document the times we live in, they are made of life itself. That his music and reputation have survived decades speaks volumes about his gifts. Dylan's lyrics have been the subject of university literature courses and countless scholarly discourses; they have rich meaning; they challenge conventional wisdom; and are fierce in their enduring vitality. They run wide and deep—emotions unconditionally preserved in song.

Dylan's thirty-third studio record, Together Through Life, is one of his straight masterworks. What more appropriate title for his generations of fans than this? Despite coming surprisingly quickly after the majestic Modern Times, (Columbia Records, 2006), that is all right, as masterpieces in rock and roll were never done by people who had too much time on their hands to polish their music endlessly.

There is plenty remarkable about Together Through Life. Incredible on the strengths of its songs alone, some stand among Dylan's finest work, like "Beyond Here Lies Nothin.'" Yet the mood here is dark in its maturity, and most of the time it follows the same dark bluesy streak as Time Out of My Mind (Columbia Records, 1997) and Love and Theft (Columbia Records, 2001).

But beneath its placid surface lay the rugged scars of middle age, when holding onto and cherishing love is a lot more difficult than finding it; the echo of the stray spirits that lurk there wandering through Dylan's songs. And within these spare settings, his search for shelter from the storm resonates like a heartbeat. The genesis of this album can be traced to a yet-to-be-released film, Olivier Dahan's My Own Love Song, to which Dylan contributed the song "Life is Hard." The session proved so relaxed and unhampered that the band continued to record the 10 tracks in quick succession. This record is full of songs that are destined to be memorable, including "If You Ever Go to Houston," "This Dream Of You," "Shake Shake Mama" and, especially, "I Feel A Change Coming On."

Dylan's songwriting, for which he shares a credit on nine songs with Grateful Dead lyricist Robert Hunter, is blissfully assured, containing some of his most evocative lyrics. There are nice accordion sounds that make their way to several songs and add a nice Tejano sound, suggesting how things might sound were Ry Cooder to produced one of Dylan's records.

It seems that in the last 15 years Dylan has enjoyed one of the most critically acclaimed and productive periods of his career. Together Through Life is definitely a high point and ranks with his very best. In a way, perfection and art don't really collide, but they do communicate and Dylan is, without question, an artist in the true sense of the word. Real art remains even when fashion changes. Beyond that lies nothing.

Beyond Here Lies Nothin'; Life Is Hard; My Wife's Home Town; If You Ever Go To Houston; Forgetful Heart; Jolene; This Dream Of You; Shake Shake Mama; I Feel A Change Comin' On ; It's All Good.