By Jakob Baekgaard
November 15, 2007
Sign in to view read count 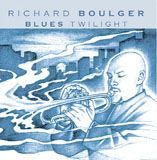 Getting an endorsement from a living legend like Freddie Hubbard seems like a dream situation for every aspiring trumpeter and here it is, written out in bold types. Hubbard has written the liner notes for Richard Boulger's second recording as a leader, Blues Twilight, and he is more than thrilled about Boulger's playing, calling him "an impassioned improviser" with "great chops and facility on the horn.

There's a sense and respect of tradition that goes both ways here. Hubbard is recognizing the voice of the new generation in words and Boulger is paying homage to the old generation in his playing, taking up the line from Louis Armstrong to Miles Davis with special emphasis on the modal compositions of the 1960s and 1970s. The ability to adapt into tradition is a virtue that is sometimes taken for granted in jazz. Nowadays, the typical young jazz musician has eclectic tastes that encompass both Radiohead and Coltrane. There's nothing wrong with that; jazz has never been a pure art form, but has taken cues from different styles and genres. That said, it is refreshing to hear a musician who works within a certain established paradigm without necessarily trying to push the boundaries of the music with all sorts of electronic devices.

Blues Twilight builds upon the foundation of the kind of music that is aptly described in its title. The deep sense of groove, the basic blues patterns and the challenging lines of the horn, all released in a howl of emotion. Music to be played in those dim lighted deserted diners that the painter Edward Hopper captured so evocatively.

Throughout the record there's a wide palette of tempi and feelings. The cry of "The Eternal One," with its fury and passion, is a tribute to pianist John Hicks; Hicks graces all the numbers on the album except four, where the piano chair is taken over by Anthony Wonsey.

"Tears" is a sad ballad dedicated to the victims of the 2004 tsunami in Asia. Boulger plays a deeply felt muted trumpet and there are no flashy ornamental lines, just pure emotion. The tune also sports a pretty introduction by Hicks.

Boulger strips down even more on "From the Night," a short but tender soliloquy where it's almost possible to follow every breath the trumpeter takes.

There's more to the album, though, than the introspective moments. On tunes like "The Other Side, "Miss Sarah" and "Letting Go," the band really stretches out. Saxophonist David Schnitter does some fine soprano work on "The Other Side," while drummer Victor Jones punctuates the rhythm with a wildness reminiscent of another Jones: Elvin.

The album ends with the epic "Time Flies," and one is tempted to say: indeed it does. Even though there is a generous seventy minutes of new music here, there is not an ounce of fat or a dull moment. That is an achievement in itself and speaks volumes about Boulger's talent.

The Eternal One; Blues Twilight; Letting Go; For Souls Past; Miss Sarah; A Flower For Mary; Perceptions; Have You Met Mr. Jones; Tears; The Other Side; From The Night; Time Flies.