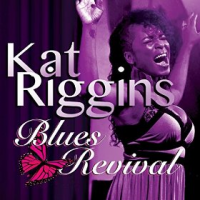 On occasion, a surprise artist stands out amongst the records which arrive for review consideration. Kat Riggins is a blues singer whose Blues Revival had a tendency to beckon for an encore after the first few tracks were played, to reaffirm what was being heard. As most recordings today employ an array of studio musicians, rare is the working band where such a gifted vocalist as Riggins is paired with an expressive guitarist as Darrell Raines, who shines brightly on this production. Rounded out by drummer Doc Allison and George Caldwell on bass, this is an exceptional group that knows how to play the blues.

Kat Riggins, hails from Miami, and has steadily paid her dues, while building an audience around South Florida, even taking her music around the world. She released her first EP "Seoul Music," a compilation of blues covers, during a 2011 Asian tour; delved more into writing on "Lily Rose" released in 2014, and penned all but two on this current release.

They open the set with the up-tempo burner "Now I See (Ooh Wee)" Riggins defining her turf from the onset, augmented by a honking tenor sax courtesy of Stephen Lombardelli. The pace drops dramatically on "Good Girl Blues," allowing ample room to stretch her vocal character. Raines comes in nice and easy on this track, showing impeccable tone and technique. He returns with enthusiasm on the suave intro of "Wail Away," and displays flashes of brilliance in the solo. This song is the perfect vehicle for Raines, as it is about a woman digging on the guitarist at a steamy juke joint. The fascination with the blues scene continues on the autobiographical "Music Fiend."

"Queen Bee," is a hard driving shuffle, Riggins singing about who she is, and then reworks Etta James' "Blues Is My Business," with determined authority. The other cover is the perpetual Sam Cooke classic "Change Is Gonna Come," a song recognized as a singers song, for one has to have the pipes to interpret accurately. Riggins not only passes the test, but takes us to church and back along the way. The vocal and guitar interaction on "The Devil Is A Liar," is as good as it gets, the moans and wails spiraling into whirlpool of lamentation.

Halfway through the record is the strategically placed "Murphy's Law," a powerful southern fried chord attack where Riggins bares her soul, testifying about taking back her freedom, and picking up the pieces. This is where she slips it into that special sanctuary where only truthful singers need venture, genuine talent required, something Kat Riggins and Blues Revival has in spades.

Now I See You (Ooh Wee); Good Girl Blues; Wail Away; Queen bee; Murphy’s Law; Music friend; Change Is Gonna Come; Blues Is MY Business; The Devil Is A Liar; Blues Is The New Black.