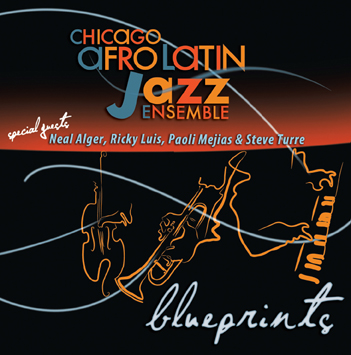 When cooking a marvelous soup or stew from scratch with all the finest ingredients, there's that special moment when the culinary creation rushes to a boil and marvelous flavors burst out explosively into the air. It's the penultimate moment only surpassed by the delicious devouring. Contentment follows.

The selections contained in the Chicago Afro-Latin Jazz Ensemble's fine Blueprints are wonderfully reminiscent of a musical recipe that simmers slowly and then bursts into a fiery buffet. This is a marvelously entertaining offering by a group of outstanding musicians, writers and arrangers. Forget the designations "Latin" and "jazz." This is outstanding, high-energy music.

The recipe here is exclusively spicy Latin with wonderful, generous dollops of inventive, hard jazz playing across the board. While the Latin (and one reggae) grooves might sound familiar, it's the playing and exciting soloing over those rhythmic/harmonic structural underpinnings that blow white-hot. There's an air of machismo that runs throughout Blueprints from note one.

Not surprisingly, this group delivers. Each selection also offers intelligent and compelling writing. The arrangements all seem to be neatly constructed to allow room for both ensemble and solo showcases to reach a climax, all while avoiding any Latin band rhythmic or harmonic clichés. The ensemble playing is tight and the arrangers demand absolutely everything of the band, including cascading pyramids and melodic/time complexities on tracks like "Captain Spok." The one vocal cut, "Vuelvo a Vivir," segues from a rather restrained reggae groove to a blistering salsa, complete with screaming trumpet dog-whistle holdover.

The Chicago Afro-Latin Jazz Ensemble soars with this exciting CD. It also further embraces the important and integral mix of Afro-American jazz and Latin pulses.

Blueprints delivers the goods and cooks. Mama, this is not your average Latin paella. This is muy fuego.