By EYAL HAREUVENI
November 27, 2015
Sign in to view read count 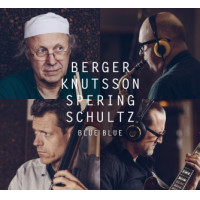 The Swedish trio of drummer Bengt Berger, saxophonist Jonas Knutsson and bassist Christian Spering has been working for 19 years, often hosting different musicians-friends. This versatile trio aesthetics blended natural elements of modern jazz with East-Asian and West-African rhythms and Swedish folk music. The trio was voted as the Swedish jazz group of the year more than ten times, but only recently decided to expand its format to a quartet, adding jazz guitarist Max Schultz, a favorite guest musician of the trio.

The seventh album of the trio-turned-quartet feature twelve compositions, five of them penned by Schultz and the others by the three remaining musicians. The atmosphere on all 12 songs is relaxed, characterized by an emphatic, nuanced interplay. Schultz fits organically into this kind of supportive interplay, solidifying the group highly melodic vein. But he is also a very dominant musician who shifts the quartet musical focus into a much more jazz-structured pieces.

The quartet limits its borders-binding spirit—literally—to the minimum and opts now for more polished, almost mainstream jazz pieces. This shift is apparent on Schultz most open composition, "Kim Corner," a piece that at first adopts a kind of Ornette Coleman open rhythmic interplay, but eventually is developed as a light, breezy piece with a Pat Metheny-like solo. Only Spering's "Tar Shehnai," on which he bows beautifully the Indian bowed instrument by this name, regains the genre-blind spirit and departs from the common jazz sensibility of most of the pieces.

Still, the quartet sound in its new incarnation is a tight, strong group, suggesting a set of new playful melodies.