BY JAKOB BAEKGAARD
February 3, 2010
Sign in to view read count 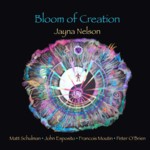 While it is often recognized that music is a matter of both the head and the heart, few artists have taken the statement as literally as the flutist Jayna Nelson. Before the recording of a concert at the legendary Knitting Factory, she instructed her fellow players by handing out copies of a diagram showing the brain's division into two different parts; left and right, the idea being that the musicians would play different parts of the brain, thus achieving a balance of the emotive and cognitive aspects of the thought process.

As speculative as this may sound, it actually works, and the result can be heard on "Tim's Brain," which is part of the concert recorded back in 1999, and now released as Bloom of Creation on John Esposito's Sunjump label.

The concert conveys a feeling of close interaction and an unhindered transition from lyrical moments like the gentle "Star Seed" to the more brusque "Return of Buffalo Calf Woman," which incidentally sounds like a flock of buffalos walking through a field.

While Nelson plays a crucial role on the record with her characteristic, dancing sound, more than anything, the record is a product of collective improvisation. As Nelson writes in the liner notes: "The creative process is never a solo journey. Bloom of Creation is the collaboration of rare souls conversing in the universal language of music."

It is hard to disagree that Nelson and her group achieved something special on that night in February at The Knitting Factory. Now, thanks to the tireless effort of Esposito, the product of these great minds is no longer lost, but a document preserved for the ages.