By Michael McKinney
December 30, 2019
Sign in to view read count 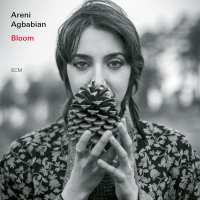 Singer and pianist Areni Agbabian is probably best known for her work with Armenian-American pianist-wunderkind Tigran Hamasyan, in which the two musicians draw from their shared Armenian heritage. Both are also adept at creating moments of hazy and ethereal beauty.

Bloom, Agbabian's ECM debut, made without Hamasyan, focuses on such moments. The album is defined by Agbabian's voice, a haunting alto with a ghostly sheen. She rarely aims for flashy or obviously technical vocal turns; instead, her performance relies upon the strength of her timbre and subtly shifting melodies.

Together, the pair give their desolate and wind-blown compositions an unexpected heft; these pieces rarely grab for the nape, but their atmosphere is bewitching enough to achieve the same effect. "Garun A" is a fine example of this. Stocker's drumming is restrained, just a few notes repeated on what sounds like a timpani; meanwhile, Agbabian sketches in slow motion on top, tracing a melody that suggests it may repeat into infinity. This approach —bottling time and stretching moments into minutes—is profoundly entrancing. The closer one looks into its undulations, the more severe and disorienting they become.

This sense of timelessness is furthered by smart compositional decisions. "Petal One" introduces an eerie leitmotif that reappears in both "Petal Two" and "Full Bloom," turning more unsettled each time. Short pieces that might seem like interludes elsewhere are stitched together into an otherworldly and mournful patchwork. But every time the record threatens to grow too disarrayed, a brief respite is offered in the form of another theme: the rippling chords found on "Rain Drops" and "Whiteness" is the calmed and stilled mirror image of the quiet agitation found in "Petal Two."

Most of the record achieves a beauty situated between the poles of its anchoring motifs. "Mother" suspends Agbabian's voice in thin air, with the piano serving as an underpinning that suggests a foundation rather than building one. "Yearning" is a sort of showcase for Stocker: his metallophones create a current that a detuned piano then floats through. "The River" sees the duo at their most turgid, pattering and whirring percussion turning urgent as Agbabian speeds up and takes on an unexpectedly wide range of motion.

In Bloom, Agbabian and Stocker have crafted a beguiling world. Its magnetism is fueled by songs that dissipate as quickly as they appear; it is serene and surreal in equal measure. Its smoke-filled rooms and seemingly desolate landscapes reward repeated exploration, revealing new nooks and crannies each time.