BY DAN BILAWSKY
February 5, 2018
Sign in to view read count 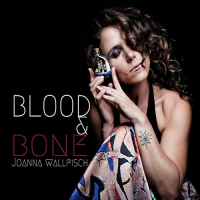 As with any path to discovery or healing, there are mixed emotions to be found along the way here. On the album's tied-together bookends—"The Ship" and "Blood And Bone"—inspiration is born through the acknowledgement that the strewn wreckage of heartbreak can be pieced together; in "The Shadow Of Your Ghost," Wallfisch's painful trip down a relationship's memory lane (and its aftermath) proves wince-worthy in its emotional translucence; self-pity and in absentia conversational reflection presents with the ring of sad truth on the tearful "Anymore"; and the uplifting "Bo Ba Bo" provides a needed dose of hope, strength, and perspective that pushes back in the face of so much uncertainty surrounding it.

While Wallfisch would certainly have been artistically justified had she decided to make such a tremendously personal statement on her own, she chose instead to invite collaboration and fellowship. In doing so, her intentions are amplified and her pure-toned voice is given a raised platform to stand upon. Jesse Elder—her co-producer and the album's man-of-many-keyboards—calls to the gleam and the gloaming, drummer Kenneth Salters proves skilled at playing things even-keeled and providing stark percussive thoughts, bassist Pablo Menares solidifies all of the settings he inhabits, and several others shade their guest appearances with various emotional tones. But all join in solidarity with Wallfisch to help produce musical beauty of a many-colored sort that speaks to straight to the human condition.

Whether coasting over The Solar String Quartet's pastoral bed while chewing on the persistence of memory during "Summer Solstice," taking a lighthearted stroll through the radio-friendly "Runaway Child," riding a countrified road on "I'm A Traveler," or exploring the fear and vulnerability that come with love in "The Truth," Wallfisch manages to draw a mirror to herself while also allowing all of us to witness the reflections it produces. In Blood & Bone, everything is revealed.