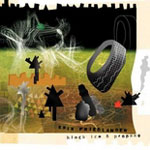 The seemingly endless horizon of the Great Plains. The vast expanse of "Big Sky country. The NYC skyline emerging after a long trip. Some features of America are best appreciated with the ground-level intimacy afforded by a classic road trip. And once experienced, they cannot help but leave an impression. Cellist Erik Friedlander used these impressions, gleaned from childhood family trips, as inspiration for his solo CD Block Ice & Propane.

No stranger to developing extended techniques for cello, Friedlander wanted to expand his pizzicato palette by incorporating guitar methods, such as strumming and finger picking, having played the guitar in his youth. As he worked out these new methods, he was reminded of the long family vacations planned by his father, famed photographer Lee Friedlander, and composed with them in mind. The resulting pieces are intensely personal, with touches of folk and roots Americana, seamlessly merged with the modern classical and avant-garde strains usually found in Friedlander's music.

"Airstream Envy, inspired by the kind of RV his family didn't have, opens with a formal bowed movement, but soon cedes to a charming, Appalachian fiddle-like melody, accompanied by a sympathetic drone. Though the elements may not seem to fit, in Friedlander's hands they are subsumed into a cohesive sound, the formal and folksy working together. His guitar-like techniques are highlighted in several pieces, including "King Rig and "Yakima, and reveal themselves as vital extensions of Friedlander's expression. Played on cello, not guitar, the songs are novel but retain a certain timeless familiarity, as Friedlander filtered a wealth of traditional American music through his writing.

In the July 17, 2007 CD release performance at New York's Joe's Pub, Friedlander opened with the title track, another strummed gem. The resultant sound approximated a North African mandola, itself a cross between a lute and guitar. His father's photographs from those family trips were projected behind him, a fitting merger of the visual and musical that provided context. A quasi-Flamenco section flowed after the arco introduction of "Road Weary, causing the standing-room-only crowd to erupt with applause. Alternating between bowed and plucked, composed and improvised and traditional and avant-garde, Friedlander demonstrated the cello's broad range of sounds and textures. Pushing himself technically and creatively, he is forging a new canon of cello music.