By John Kelman
September 20, 2008
Sign in to view read count 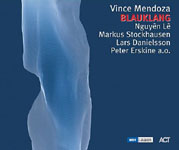 It's been nearly a decade since composer/arranger Vince Mendoza released the sweepingly orchestral Epiphany (Zebra, 1999), but he's been anything but inactive. The arranger/orchestrator of choice for artists including quirky popstress Bjork and her hit album Vespertine (Elektra, 2001), and Joni Mitchell—reinventing the iconic singer/songwriter's vast songbook on Both Sides Now (Reprise, 2000) and Travelogue (Nonesuch, 2002)—he's remained a vital part of the jazz sphere with his vivid big band arrangements for trumpeter Randy Brecker's Some Skunk Funk (Telarc, 2006) and his exciting rework of Joe Zawinul's Weather Report orchestrations for the WDR Big Band on Brown Street (Heads Up, 2007), the keyboardist's final album before his passing.

As strong an arranger/orchestrator as Mendoza is, his high visibility projects make it easy to forget his distinctive compositional voice. Blauklang—his seventh album as a leader and the conclusion of a trilogy that began with the Arif Mardin collaboration Jazzpana (ACT, 1993) and solo effort Sketches (ACT, 1994)—features imaginative arrangements of music from Miles Davis ("All Blues"), Gil Evans ("Blues for Pablo") and the public domain (the traditional "Lo Rossinyol"). But it's his own writing that makes this album's unique collective—including string quartet, harp, tuba, French horn, reeds, trumpet, guitar, bass, drums and vibraphone—such a profound addition to his discography. With the exception of the similar but equally strong Start Here (World Pacific, 1990) and Instructions Inside (Manhattan, 1991), each release illuminates a different aspect of Mendoza's inestimable talent, while continuing to augment a significant and instantly recognizable body of work.

Mendoza calls upon friends old and new, with Nguyen Le returning from Sketches to contribute his own special mix of harmonic and coloristic breadth. The guitarist is one of Blauklang's primary voices, elegant on a gently swinging "All Blues" while demonstrating a more aggressive fusion attitude on the powerful closer to Mendoza's six-movement "Bluesounds" suite. An orchestral player capable of supporting the textural aspects of Mendoza's delicately evocative "Habanera" and subtly lyrical "Ollie Mention" while pushing the more forceful parts of "Movement II" and "Movement VI" of "Bluesounds," Peter Erskine makes it perfectly clear why he has been Mendoza's drummer of choice dating back to Vince Mendoza (H.I.T. Avenue, 1989). Trumpeter Markus Stockhausen, clarinetist/saxophonist Claudio Puntin, French hornist Arkady Shilkloper and bassist Lars Danielsson are newcomers to Mendoza's universe, but are all established names who mesh comfortably with it while, at the same time, bringing something new to expand its boundaries.

Mendoza's boldly unclassifiable writing relies on complex counterpoint and challenging meters ("Movement II"), near-ambient stasis and electro-centric textures ("Movement I"), and beautifully layered harmonies and neoclassical leanings ("Movement III"). Blauklang may revolve around blue as a distinct musical color, but it's far more than homage to the traditional concept of the blues in jazz. Instead, deeply substantive yet wholly accessible, Mendoza daringly expands the vernacular by including elements of abstract impressionism, romanticism and a highly unorthodox palette to position him as the clear and natural successor to the late Gil Evans.