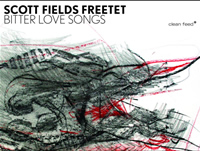 The Freetet is ostensibly Cologne-based guitarist Scott Fields' "traditional blowing vehicle," and Bitter Love Songs is his first in the guitar-bass-drums format since Mamet (Delmark, 2001), with bassist Michael Formanek and drummer Michael Zerang. On Bitter Love Songs, he's joined by German bassist Sebastian Gramss and Portuguese drummer Joao Lobo. What makes this date a semi- departure for Fields is that, in the last six years, most of his work has been for chamber ensembles with unique instrumentation; improvised but with challenging notation. These include Beckett (Clean Feed, 2006) and We Were the Phliks (Rogue Art, 2007).

"Yea Sure, We Can Still Be Friends, Whatever" opens Bitter Love Songs, an evermore scumbled improvisation on a simple-but-effective bluesy theme, from fleet mid-range choruses to muted smears interspersed with referential flecks. Gramss and Lobo make a solid post-bop pair, yet seamlessly enter into frantic collective interplay as Fields' runs become blurred.

More pointillist is "Go Ahead, Take the Furniture, At Least You Helped Pick It Out," occupying similar structural territory to Fields' more delicate chamber pieces, while still sallying forth with a pliant groove.

What might separate this group from "traditional" theme-solos-theme orientation is that, for the most part, the leader is the only soloist (Gramss is spotlighted on "I Was Good Enough for You..."). Nevertheless, the Freetet's approach is certainly unified—as Fields' playing becomes more fragmentary and texturally diverse, Gramss and Lobo up the ante. Indeed, the bassist is frequently the first to follow Fields in speedy plucked lines, as mutual shading soon approaches a locking of horns.

"My Love is Love, Your Love is Hate" (winner of the shortest-title contest on this disc) finds the writing becoming progressively more seasick in a hellishly knotty melodic/rhythmic collision, Lobo's suspended time gradually filling in momentum alongside the strings' ornate picking, digs and scrapes. Sub-tonal jabs behind the bridge approach British guitarist Ray Russell's territory, before the trio brings the tune into a muddy thrum. One must be prepared for relentlessness with this disc—even the brief calm of a dusky Grant Green-ish melody on "Your Parents Must Be Just Ecstatic Now" is quickly overtaken by a storm of fuzz and piercing shards.

When Fields and guitarist Jeff Parker convened a double-trio for Denouement (Geode, 1997, reissued on Clean Feed), the level of interplay from the "paired Freetets" astounded this writer. On Bitter Love Songs, multiplying the equation is unnecessary, as there's so much music available here.

Yea, Sure, We Can Still Be Friends, Whatever; Go Ahead, Take the Furniture, at Least You Helped Pick It Out; My Love Is Love, Your Love Is Hate; Your Parents Must Be Just Ecstatic Now; I Was Good Enough for You Until Your Friends Butted In; You Used to Say I Love You but So What Now.