By Nenad Georgievski
November 25, 2017
Sign in to view read count 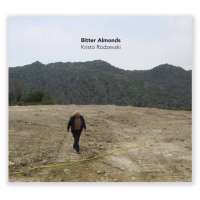 On his sophomore release, titled Bitter Almonds, singer and songwriter Krste Rodzevski shows his full embrace of the ethereal and the noisy, of the melodic and the dissonant, and delivers a moody but kaleidoscopic release. In many ways, "Bitter Almonds" feels like an extension or a branch of the hypnotic calm on Rodzevski's debut, Batania which was a melodic song cycle full of inner bliss, inner sadness, immersive melancholy and hidden joy. The first word that is likely to be used for describing both records is "folkish" but that would only mistakenly suggest that this is a relaxed comfort music. Sang mostly in English, the words find him tangled up in grief and full of contrasting emotions.

While Batania was decidedly more subdued, as it offered a gentle take on acoustic folk with a minimal band support, Bitter Almonds feels like a more toned-down take on the type of instrumental experimentation that Rodzevski's support band is known for. For this record, Rodzevski has again enlisted the talents of guitarist Mary Halvorson, saxophonist Chris Speed, drummer and producer of this record Tomas Fujiwara, bassist Michael Blanco. Their presence can be felt from the opening "Farewell Burlesque," a gentle song that wraps itself in a blanket full of contrasting melodies, subdued dissonant guitar lines, and angular guitar hooks, and sometimes almost detached vocals and obscure lyrical references. There is a curious juxtaposition of the traditional and subtle straying from the well-trodden path.

The songs are more fragile, on the cusp of breaking, jammier, looser. Much like the previous outing, it's all about subtleties. "The Soldier's Eye" explores classical chamber music but it turns into a pleasant melodic piece where along with cellist Tomeka Reid he captures a kind of sprawling cinematic autumnal folksiness. On songs like "Unfinished Sweater" and "Ladybug" he sounds more playful and bouncy as these songs contain flourishes of sun-kissed 1970s singer-songwriters styled songs. With its shimmering folk-country guitars and soaring Tim Buckley-like harmonies, they feel more like one of Jayhawks' folkish songs. They certainly break the meditative feel in the previous songs.

Lyric-wise, the songs here are about as earnest and evocative as anything he has ever written. Because of that, the whole of Bitter Almonds is often incredibly personal, and often the rawer the lyrics, the more fragile the music. "Dear Father" has that rustic beauty and autumnal colors of Nick Drake's songs but without his subdued resignation and desperation. "Bowery" is an upbeat little rocker with Rodzevski's vocals being processed to achieve an otherworldly effect. It's a song arranged in several stages with the rock riffing and the theatrical parts where the band is creating a cinematic chamber feel with their improvising. This song feels like a more focused effort and a more definite statement than the rest. The album closes with "Mold" where the clouds encroach on the clear skies. There is a hypnotic feel to the graceful flourishes of the song's melodies that feel like a filigree.

Bitter Almonds is an evocative collection of simple and elegant songs where it is evident that Rodzevski's appeal lies in his solid songcraft. At his best, Rodzevski finds depth in simplicity. All of this feels like it was recorded in one go and on the verge of breaking up and crashing down. In other words, these songs sound like demos awaiting full treatment. This record could have benefitted from a tighter editing but given the personal nature probably no rough cuts could have been made without losing the music's flow and its free nature. Even so, there are many moments to treasure on this record. Evidently, Rodzevski has evolved as an artist, and Bitter Almond is a worthy statement.