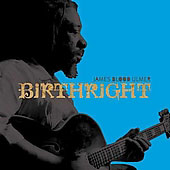 James Blood Ulmer continues the all-out assault on the blues that he began with 2001's Memphis Blood and continued with No Escape From the Blues, released in 2003. After thirty years riding the edge of the avant-garde with the harmolodic Ornette Coleman and others, Ulmer emerges as a rural blues Sun Ra, a 21st century musical prophet with an irreverent smattering of Rahsaan Roland Kirk and Cecil Taylor.

Birthright is ostensibly a solo "acoustic blues recording, but saying that is like saying John Coltrane's Giant Steps was a mere hard bop recording. Both statements are technically truthful, but both are also spiritually naïve. Of Ulmer's three recent "blues recordings, Birthright is the most fully conceived and realized. Memphis Blood was a tour-de-force of nature that laid waste to all in its critical path. At the Sun Studios, Ulmer channeled the angry, corrosive spirit of Chester Burnett into a boiling magma of a recording.

No Escape From the Blues was a serious bit of psychedelia, heavily produced by Vernon Reid, finding Ulmer is a very Jimi Hendrix-ish mood. The guitarist is buried beneath the sonic excesses of the late 1960s, betraying a sincere effort sullied by trying to commercially force the issue. While a great effort, James Blood Ulmer deserved more thoughtful guidance—his own.

Birthright is a different animal from these previous recordings. The solo nature of this recording manifests in a densely intimate aural environment. Ulmer's approach is relaxed and spontaneous. The twelve songs on the disc sound as if the guitarist has been performing them forever and just sat down to play them one more time.

James Blood Ulmer has always been an enigmatic guitarist and vocalist. At best, I would describe his vocal method as thorazine stutter—that is to say that his method is densely personal and unique. His guitar playing? It's in a universe all its own. The disc sports two instrumentals, "High Yellow and "Love Dance Rag, both clinics in melodic chaos resolving itself by magic into musical sense. Ulmer just plays the guitar in his own sweet way.

The songs presented on Birthright are not all blues. There are only two "standards, Wolf's "I Ain't Superstitious and "Sitting on Top of the World, both dispatched in a 21st Century manner. "Where Did All the Girls come From, a folk song from his 1981 recording, Free Lancing (Columbia), boasts the deep depth and breadth of Ulmer and his art. The lengthy "The Devil Got to Burn is Blood's "Death Letter, replete with unpredictability and some of the strangest flute playing ever. Tear notes brag about the importance of this recording. This disc deserves these bragging rights, as it offers the casual and experienced listener very different things.

Take My Music Back To The Church; I Can