BY LARRY TAYLOR
December 28, 2007
Sign in to view read count 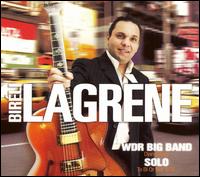 Bireli Lagrene, heir apparent to the legacy of legendary Gypsy guitarist Django Reinhardt, has recently released an outstanding two-CD set, Djangology/To Bi Or Not To Bi . The first disc was recorded live with the powerhouse German big band, WDR; the second is a solo endeavor that showcases Lagrene's remarkable virtuosity.

Born in Germany in 1966, within a traditional Gypsy community, Lagrene started playing guitar aged 4, and by the time he was 8 had, it is said, worked his way through most of Reinhardt's repertoire. At 12, he was a well-known prodigy and had toured Germany, and while still in his youth recorded a live double LP. Lagrene relocated to the US while still a teenager, hooking up with guitarist Larry Coryell in 1984 and going on to play with bassist Jaco Pastorious' fusion group. In 2001, he went back to a more traditional Gypsy/jazz style, touring and recording in Europe and the US.

On Djangology , Lagrene plays electric guitar, accompanying and soloing with the big band. It's an impressive concert, recorded live at the IAJE conference in New York, 2006. Riding razor-sharp arrangements by conductor Michael Abene, the musicians swing with solid, Count Basie-like precision. There are overtones too of Gil Evans' shifting, undulating section patterns on several tracks.

On the up-tempo standard "Caravan, Lagrene gallops along at a breakneck pace, pulling the band with him. He also sings two ballads on the record, "The Shadow Of Your Smile and "The Good Life, in a pleasant, Tony Bennett-tinged voice.

On To Bi Or Not To Bi, which includes 10 Reinhardt compositons, Lagrene plays unamplified, solo guitar, giving full payment on his debt to Reinhardt. One stand-out track is the complex "Sur La Croisette, to which Lagrene gives an enjoyable classical twist. Rock checks in too, with a tongue-in-cheek medley featuring Queen's "We Are The Champions and "We Will Rock You and the pop hit "It Was A Very Good Year.

Paradoxically, these two discs give voice to one of today's true originals, albeit one mindful of his legendary mentor's legacy.

To Bi Or Not To Bi:Sur la Croisette; London (Soll Love); R & Bi; Deauville en Ville: We Are the Champions/We Will Rock You/It Was a Very Good Year; Sous les Pommiers; Capucines; Belle Vie; Madras Express; Amparo; Bar de Nuit; To Bi or Not To Bi; Vague a l'Aime