By WALTER KOLOSKY
November 16, 2002
Sign in to view read count 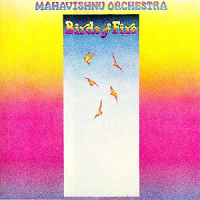 In 1973, hard rock ruled the universe. But Birds of Fire , a pure instrumental jazz-rock album, managed to crack into the Billboard Top 20 Rock Charts. This was unheard of. And so was the music.

Birds of Fire advanced fusion into the modern age, a mere year after the band's The Inner Mounting Flame had given it its real birth. Rock and jazz fans from all over the world tuned into the Mahavishnu Orchestra and it seemed as if there was no end in sight. Jan Hammer now played the MOOG synthesizer, and the new voice it added to the band was elevating. Sure, by foregoing the roughness of the electric piano, some of the band's anarchy was gone. But in its place, the Mahavishnu Orchestra offered jazz-rock anthems. The band's tunes were carefully built, musical brick by musical brick. Fully fleshed-out themes filled the ears, and the rhythmic intensity was strangely comforting. This was despite the fact that at any second, the course of the music would change so drastically that you needed a seatbelt. This album was recorded LOUD. In a strange and wonderful way, the loudness of the music served as a shelter from all of the problems of the outside world. And believe me, there were plenty of troubling things going on at the time.

The most outstanding piece is "One Word." "ONE WORD" is THE WORD. On no other tune ever recorded by the Mahavishnu Orchestra does each member contribute so much. This was the first MO tune I ever heard, and I will never forget the chill that went up and down my spine when the band kicked in after Billy Cobham's quasi-martial drum solo.

"Birds of Fire," which opens up the album, is a fusion classic. John McLaughlin scares the hell out of his guitar with his melodic convulsions. If you ever want to frighten a musical neophyte, turn your stereo up really loud and play the cover tune - it's guaranteed to send him or her fleeing. "Resolution" and "Hope" ended side one and side two of the original LP, and this juxtaposition gave the record more meaning than the continuous play CD. You could take a much needed breath while you flipped the record.

The Inner Mounting Flame and Birds of Fire set the standard for great fusion music in the 1970's. It is too bad commercial considerations eventually led many companies to "pimp" from their success. McLaughlin never did, and it cost him a lot of money.