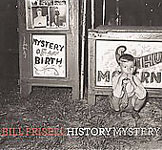 While guitarist Bill Frisell has continued to shape his uniquely skewed confluence of musical styles, it's been too long since he weighed in heavily on the compositional side. In recent years, the writing has most often served the playing, largely providing a context around which the guitarist and various-sized groups can explore, expand and mine. That's by no means a bad thing, and has resulted in some fine albums including Bill Frisell, Ron Carter, Paul Motian (Nonesuch, 2006) and East/West (Nonesuch, 2005). But on more authorial discs like the career-defining This Land (Elektra/Nonesuch, 1994), as undeniably key as the improvisational acumen of his ensemble was, there was a greater sense of the playing serving the writing.

History, Mystery rebalances Frisell's interest in composition and improvisation more equitably. A lot has changed since This Land, so Frisell fans looking for the sharper edges and harsher extremes of that disc will find that the double-disc History, Mystery still feels absolutely of a kind with recent releases. Relaxed, laconic and as occasionally quirkily witty as ever, there's also a darker melancholy pervading some of this music for an expanded ensemble of guitar, bass, drums, cornet, reeds, violin, viola and cello. Largely recorded live, much of History, Mystery stems from Frisell's ongoing collaboration with Jim Woodring, whose artwork graced the covers of Gone, Just Like a Train (Nonesuch, 1998) and With Dave Holland and Elvin Jones (Nonesuch, 2001).

With a wealth of through-composed material featuring Frisell's astute arrangements in a near-chamber music context, the guitarist's effortless mastery of real-time processing is still a strong textural component. Nor has the guitarist deserted rhythm happy music entirely, mining a simple song like Sam Cooke's "A Change is Gonna Come," a stylistic shifter to the first disc's narrative where Frisell's arrangement for Greg Tardy's tenor and Ron Miles' cornet create an unexpectedly spare yet lush backdrop for bassist Tony Scherr and drummer Kenny Wollesen's reductionist pulse.

Thelonious Monk's "Jackie-ing" follows, three minutes of elegant swing and further proof that Frisell's flipped-on-its-side approach is the closest any guitarist has come to truly capturing the spirit of the late, great, quirky piano icon. Despite the form's predominance, violinist Jenny Scheinman, violist Eyvind Kang and cellist Hank Roberts—like the rest of his group, all long-time occasional associates—find ways to blend form and freedom, without the benefit of delineated soloing.

Frisell's new original material largely dominates, although he does revisit the deceptively simple "Monroe," from Good Dog, Happy Man (Nonesuch, 1999), this time in three different versions that thematically thread the entire second disc; first as a duet between Frisell's delayed/looped guitar and viola, second as a guitar solo; and finally as a closing coda for tremelo'd guitar and viola. It's evidence that there's often more than meets the eye to Frisell's writing. Even Frisell's Americana work—music that has come under no small degree of unfair criticism as diluting of his "jazz" cred—can be grist for greater harmonic sophistication and orchestrated depth. Frisell may have largely simplified his writing in the past decade, but it's still compelling, evocative and rife with possibilities.

Still, for the first twenty minutes of the first disc, from the brooding waltz-time of "Imagination" to the faux-Jewish ambience of "Probability Cloud," ethereal angularity of "Out of Body" and blues-tinged "Struggle" that references the similarly spacious groove of "Ron Carter" from Blues Dream (Nonesuch, 2001), Frisell deftly combines oblique yet attractive writing with rhythm-centric passages that tread a fine line between detailed structure and collective spontaneity.

While not as in-your-face impressive as This Land, a high water mark for Frisell the composer, History, Mystery does possess some of his best scored writing since. By combining it with looser groove-centricity and a top-notch octet capable of a myriad of soundscapes, it's a masterpiece of consolidation that also demonstrates Frisell's penchant for roots music has done nothing to compromise the idiosyncrasies that have been so definitive of his voice since he emerged almost thirty years ago.