As described in an earlier review of his first round of Earthworks reissues, drummer Bill Bruford considers 1987 as something of a fence constructed in his career—the year where he, at least from the perspective of his own work, stopped being considered a rock drummer, becoming a jazz drummer. Walking away from "all guitars and electric" towards "all saxophones and acoustic," it's a distinction made only by people who need to stylistically pigeonhole an artist—something Bruford has steadfastly avoided throughout his nearly 40-year career.

The formation of his first Earthworks band—often referred to as Earthworks Mark I, including saxophonist Iain Ballamy and keyboardist/horn player Django Bates, who would both go on to greater recognition in a variety of contexts—represented a significant shift for the ex-Yes, ex-King Crimson percussionist. Still, when taken in context and with the hindsight available nearly twenty years later, it becomes clear that this group was really just an evolutionary step along a greater continuum.

With their first recording, 1987's Earthworks, being co-produced by Bruford and Dave Stewart—Canterbury keyboard legend who, amongst other things, was a member of Bruford's late-1970s progressive fusion band responsible for albums including One of a Kind and Gradually Going Tornado—there was a stylistic link back to those earlier records. Less rock to be sure; but equally filled with the kind of meticulous rhythmic conceits that Bruford has become so expert and seamless in that you'd never know you were tapping your foot in 15/8 while snapping your finger in 9/8—meeting up only at points where the two rhythms mathematically converged.

But by the time of Earthworks' second album Dig?, the group started moving away from their debut's stronger though mathematically-challenging backbeat, and towards a looser rhythmic style that embraced a clearer jazz aesthetic—albeit filtered through a distinctly British lens. With the reissue of Earthworks' final two discs—1991's All Heaven Broke Loose and the live album, 1994's Stamping Ground, the group may have retained the firm structures linking them to Bruford's earlier projects, but it demonstrated an even greater sense of freedom within those structures that pointed the way to Bruford's fully-acoustic Earthworks Mark II group, which hit the ground running in 1999 with A Part and Yet Apart.

Like the earlier Earthworks reissues, on Bruford's relatively-new Summerfold Records, All Heaven Broke Loose and Stamping Ground are both remastered and include bonus tracks that, when added up, total a full album's worth of live material to supplement Stamping Ground, shedding even greater insight into the kind of interplay and liberal interpretation that made Earthworks Mark I an even more powerful live unit than it was studio innovator. 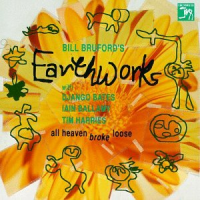 Bruford's Chordal Drum system is all over the opening track on All Heaven Broke Loose, the funky "Hotel Splendour." But what's truly remarkable about Earthworks, by the time they reached this third studio release, is how well they integrated technology into a more open context. In fact, Bruford moves so effortlessly between his electronic drum system—which allows him to trigger keyboard samples, freeing up Bates to play his Eb Peck horn and trumpet—and his acoustic kit, that it's often only the very presence of Bates on a horn that indicates it's Bruford creating the chordal backdrop.

It's also uncanny how the group manages to combine longer-form compositions with the kind of loose spontaneity that makes them Bruford's first real jazz group. Over the course of the eight-minute "Forget-Me-Not," the group moves from rubato tone poem to a kind of Weather Report-lite. The feel is loose, yet the magical way that Bates and Bruford alternatively pick up the harmonic backdrop while never dropping the ball on the song's forward motion, belies a deeper and more clearly-defined intention.

It's also worth noting that, while Bruford had considerably more cachet at the time than either Bates or Ballamy—or, for that matter, bassist Tim Harries—he was, and continues to be, something of a perpetual and deferential student. While groups with a distinctly-visible leader often become primarily vehicles for that leader's compositions, Bruford always has been—and continues to be—a collaborative writer. Seven out of the eight compositions on All Heaven Broke Loose are shared efforts, with the one solo composition, the beautiful ballad "Candles Still Flicker in Romania's Dark," being written by Bates. It's this very selflessness that has seen Bruford continue to grow, not just as a leader, but as a writer. His own writing is reflective of the influence that the younger players he so often surrounds himself with exert, and it's that very desire to evolve that has seen his own career carve such a unique path.

Another key factor in Bruford's own development has been his openness to collaborative producing. While he's reached a degree of singularity of vision that finds him sole producer of releases by Earthworks Mark II onwards, nearly all his earlier releases found him co-producing. In this case he shares the chair with David Torn, whose conceptual acumen has evolved so that he's now considered like a silent member of whatever group he produces. Torn's sonic voice may be more distinctive these days, on projects by artists including Tim Berne and Dave Douglas, but even at this relatively early stage his more subtle approach to orchestration is in direct contrast to Dave Stewart's more overt influence on Earthworks. It's impossible to know for sure if the ambient backdrop at the start of "Temple of the Winds" is Torns'; but based on his subsequent work, it's a fair guess that he had a say here. As is likely the case with a lot of the "ear candy" that's best heard when listening to All Heaven Broke Loose on a set of headphones.

Equally, while Earthworks' stylistically purview is broad indeed'"from Ballamy and Bates' "Splashing Out," where it's early techno leanings are scuttled by Ballamy's more outré tenor, to the funky but metrically-complex Ballamy/Bates/Bruford composition "Nerve," with its lengthy theme breaking down into a free-form anti-solo sonic collage. But equally, this is a group that—while distanced from the American tradition in so many ways'"can swing when they need to. It may be only a brief contrasting diversion, but "Temple of the Winds" proves that everyone has spent some serious time wood-shedding a more straight-eights approach.

This reissue includes live performances of the calypso-like "Libreville" and the more atmospheric "Pilgrim's Way," both originally released on Dig?, and demonstrating how—despite the rigors of the group's technology—Earthworks Mark I was able to rework and open up the material in performance.

All Heaven Broke Loose is arguably Earthworks Mark I's most fully-realized studio release, even as it moves towards a more abstract aesthetic. Still, despite its off-kilter approach to tunes that avoid conventional form, Bruford's intrinsic time sense keeps things grounded throughout. 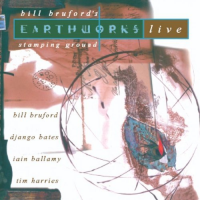 When Stamping Ground, Earthworks Mark I's swan song, was released in 1994, it demonstrated what those fortunate enough to have caught the group in performance already knew—that despite Bruford's reputation for rigid structure in earlier projects within and outside his leadership, this was a group where every performance was, indeed, a new experience. In some ways the most surprising record of Bruford's career to date, for those whose exposure to this band has been with the Summerfold reissues, it's less of a revelation, as the bonus tracks included on the three studio discs already made this abundantly clear.

While the group was an on again-off again affair—everyone was involved in a variety of projects and there simply wasn't enough work to keep a group of this nature together full-tilt over its six-year existence—it was equally evident just how much the group had evolved from its first release. Even more structured song-form tunes like the pop-like "Up North" feel somehow looser, in no small part due to Ballamy and Bates' growing confidence as soloists. Equally, "A Stone's Throw" is an episodic tour-de-force, with Ballamy's soprano and Bruford's Chordal Drums creating an even more oblique intro than on Dig? before its more balladic theme sets the pace for some of Earthworks Mark I's most intensely-swinging work on record.

The quirkily-funky theme of Bates' "Emotional Shirt" opens up into a free-jazz middle section that, aside from powerfully abstruse solos by both Bates and Ballamy, demonstrates just how much Bruford's own playing had opened up. While still capable of the kind of polyrhythmic complexities on which he established his name, Bruford's ability to breathe with the music is a definite precursor to his equally-relaxed work on more recent Earthworks Mark II discs.

Yet, while the group leaned towards a more abstract sound, they were still able to deliver tunes of undeniable poignancy. Ballamy's "It Needn't End in Tears," a lyrical highlight from Earthworks, is filled with tender drama, yet never beats one over the head with its understated power.

But perhaps the most vivid example of the group's evolution is the closer, a ten-minute version of "Bridge of Inhibition," which also closed their debut album, but in shorter form and with a less highly-developed sense of chemistry. The studio take was more an exercise in structured anarchy, while this live version demonstrates just how intuitive the group had become. Bruford and Harries are so in synch beneath Bates' horn solo that it becomes difficult to determine who's driving who. It's also a rare opportunity to hear both Harries and Bruford solo—despite being unequivocally a jazz ensemble, neither take any significant solo space on the studio discs, nor elsewhere on Stamping Ground.

With the last of Earthworks Mark I's four releases now reissued, it's the right time to check out a clear developmental milestone for Bruford, not to mention Bates, Ballamy and Harries. Few groups last long enough that their growth can be followed in detail, and the four Earthworks Mark I releases—from the more rigidly-structured Earthworks to Stamping Ground, where their innate chemistry is in full evidence—are again proof that Bruford's move from progressive rocker to full-out jazzer has not been about major leaps. Instead, it's been about a gradual progression, where experiences of the past inform those of the present, and current experiences are a fundamental component of future songs.