BY EYAL HAREUVENI
March 3, 2008
Sign in to view read count 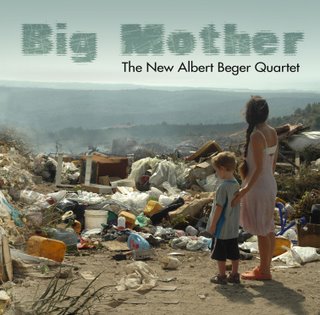 The cover of Israeli saxophonist Albert Beger's Big Mother captures your attention immediately. Yinon Tubi's photos of an anonymous, depressing rubbish dump frame Beger's love cry on behalf of all mothers, a conceptual six-part suite that calls us to action before it's too late.

The new work challenges Beger, who usually opts for shorter compositions that emphasize his abilities as an improviser and his close interplay with his partners. Most noteworthy, these have included bassist William Parker and drummer Hamid Drake, with whom he recorded Evolving Silence, Vol.1 and Evolving Silence, Vol. 2 (Earsay, 2005 and 2006). This time Beger has chosen to focus on the collective qualities of his new quartet.

The line-up feature Beger's trusty bassist Gabriel Meir, and two new members, pianist Aviran Ben Naim and drummer Yoav Zohar. Naim brings a deeper dimension to the quartet with his Ellingotinian harmonic sophistication, and with well-articulated solos that contrast and comment on Beger's fiery Aylerian blowing. The muscular drumming of Zohar supplies a steady beat, and enables Meir to use extended techniques on the bass and to introduce more sounds and colors to the palette. Beger concentrates on tenor saxophone.

The suite begins with Naim introducing the dark and dramatic "The One". Beger's playing is more reserved than usual, but still intense and expressive, and the whole quartet move as a collective unit in which each player fills his role in a complex and dramatic puzzle. The following "Yellow" offers a looser framework for improvisation. Beger begins and closes with short, optimistic solos, followed by a Naim, who reflects on Beger's statements while Meir and Zohar explore different rhythmic patterns.

"Tales Of Beelzebub", a variation on G.I. Gurdjieff's famous book, Beelzebub's Tales To His Grandson, is the most exciting piece here, and a highlight in Beger's recent performances. Its dramatic shifts and split-second stops, the well-built tension and the clear affinity between all members the quartet, lead to spirited solos from Beger and Naim.

Beger duets with Naim on the slow and meditative "Point Of No Return", before the two introduce "Big mother", a dark, march-like piece that revolves around Meir's inventive arco playing and Zohar's tough drumming. Beger, in his most exciting and free playing here, digs deeper into the repetitive "tribal" groove before returning to the emotional opening theme.

The concluding "The One For Hope" features Naim, who repeats the dramatic opening theme of the suite. This time around the quartet sound is more focused and perhaps more determined to suggest a belief in the power of music to inspire us to heal the ailing Big Mother. Highly recommended.

The One; Yellow; Tales Of Beelzebub; Point Of No Return; Big Mother; The One For Hope.