BY JEFF DAYTON-JOHNSON
March 31, 2007
Sign in to view read count 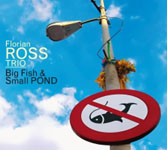 In the year before I loaded Florian Ross's Big Fish & Small Pond onto the iPod, I listened to a lot of other new piano trio releases. Even one led by another guy called Florian: Florian Weber's Minsarah ( Justin Time, 2006). Most of these records were somewhere between good and very good, but few were truly great. Indeed, the best was Enrico Pieranunzi's Untold Story (EGEA, 2006), which was already a thirteen-year-old recording. Brad Mehldau's House on Hill (Nonesuch, 2006) was pretty good too, and four years old upon release.

The piano trio is an exacting and tough format. It's heartening that so many good players continue to ply the trade, but really good dates are really rare. What makes the rare ones stand out so?

Great piano trios know how to exploit the possibilities of the format rather than making evident its constraints. There are (at least) three dimensions to this: quality of the compositions, on their own and as vehicles for improvisation; coherence and consistency of the leader's musical voice; and the quality of interventions by the bassist and drummer. This is not a surefire recipe, however. Some readers will immediately be able to suggest classic piano dates that do not exhibit all three of these characteristics, or mediocre ones with all of them.

How do Ross and his band-mates stack up?

The strength of the disc's compositions is uneven. A number of them ("Lucky for a Quarter," "Heads Up," "Petit Paul," "My Address Book") display an appealing current of soul just under the surface. The best is "Compared to What" (a Ross original, not the Les McCann tune), a wistful number to which I keep returning and which seems to embody all of the features of piano trio excellence laid out above. John Coltrane's "Giant Steps," certainly a remarkable composition, appears in contrast to intimidate the trio, whose attempt to take a fresh look at the number sounds tired and hesitant.

Ross's voice is clearly articulated: crystalline, strongly-played precision with a tendency toward taking flowery runs up and down the right-hand-side of the keyboard. As for the sidemen, bassist Dietmar Fuhr has a few surprises, such as his idiosyncratic guttering on the interlude "Small Pond—Swim II." The inclusion of drummer Stéphane Huchard is inspired. Given the not-quite-ripe soul-jazz tenor of the material, a more demonstrative, extroverted drummer might have rendered the sound overripe. Huchard, however, is given to small gestures, quiet accents and understatement—all of which complement the leader's forthrightness.

Not quite full marks (except for the nearly perfect "Compared to What"), but close. And this is a tough subject.