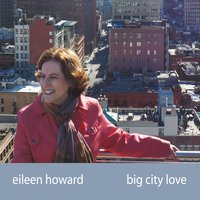 Jazz and blues songbird Eileen Howard began her singing career in the Midwest where she recorded four previous albums but in 2012, moved to New York City and has been excited about the change ever since. Big City Love is her fifth solo album as leader paying musical tribute to her new adopted home with a selection of familiar songs like "Sunday in New York," "New York, New York" and the Rogers and Hart classic "Manhattan" in the repertoire. More important than a change in scenery, is her long love affair with her life partner stating in the liner notes that "This album is my love song to New York and to my husband George" making this recording more of a labor of love in celebration of person and place.

On tap here are seven beautiful covers and standards with Howard offering four originals of her own in a nice package of jazz, funk and blues performed with a core quartet rhythm section featuring Michael Raye on the keyboards, Nat Janoff on guitar, Eddy Khaimovich on bass and drummer Darrell Smith providing the steady beats. Appearing on selected tracks the leader of The Daniel Bennett Group, saxophonist and New York staple, Daniel Bennett along with trumpeter Matthew Owens augmenting the band to a sextet at times.

Armed with a vocal instrument that's quite appealing, Howard lays down the lyrics with moments of passion beginning on the title track and the following "Home is You" dedicated to husband George. The familiar "New York, New York" receives a brand new treatment here with a slightly funky arrangement from the leader while, the Thomas O'Connell song "Till Now" is a world premier by the Nashville composer voiced elegantly by Howard with gorgeous accompaniment by Raye on the keys.

The swing is in on an outstanding version of "Sunday in New York" with the singer reaching and the music pulsating on a terrific arrangement by the pianist as the Howard Original "Love Can Change," takes a different route with a somber balladic texture as the lyrics describe the pain of love. Howard's "Absent Without Leave" takes a bluesy approach featuring guitarist Janoff on several Rock-style riffs as well as Khaimovich with his own moments on the electric bass.

Other notable songs not to be missed are, "I'll Take It All," "In Tune" and the Burke/Van Heusen standard "But Beautiful." Eileen Howard lets it all hang out with a stylish performance on Big City Love, completing a session of standard love songs, all in a jazz vocal tribute to a city and a man that have earned a special place in her heart, well done!

Big City; Home Is You; New York, New York; Till Now; Sunday in New York; I'll Take it All; Love Can Change; Manhattan; Absent Without Leave; In Tune; But Beautiful.