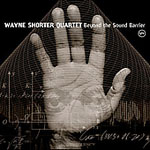 When saxophonist Wayne Shorter put together his first all-acoustic group since the '60s for a 2001 tour and live recording, Footprints Live!, it was an important confirmation that even one of the most significant artists of the past six decades could (and, perhaps, should) have something new to say. That first recording—featuring pianist Danilo Perez, bassist John Patitucci, and drummer Brian Blade—was as much about the thrill of discovery and new ways to look at famous Shorter compositions, including "Footprints" and "JuJu," as it was about the kind of chemistry that rarely occurs for an artist more than once in a lifetime. In the case of Shorter, who shared an equally simpatico relationship with pianist Herbie Hancock, bassist Ron Carter, and drummer Tony Williams as part of Miles Davis' mid-'60s quintet, it's proof that lightning can indeed strike twice.

It's too soon to tell if Shorter's quartet will have the kind of lasting impact that Miles' quintet did, but on the strength of Beyond the Sound Barrier, there's certainly evidence that it's one of the most important working groups on the scene today. Like Footprints Live!, the new album was recorded in concert, but this time at shows dating as far back as '02 and as recently as '04. And while some groups who tour as much as this unit can run the risk of becoming complacent, finding their way into patterned behaviour and predictable responses, it's clear from the first notes of Arthur Penn's movie theme "Smilin' Through" that, if anything, this quartet is reaching even further, revelling in a shared telepathy that makes every performance a risk and a reward.

Like the magic of planets aligning—but far less predictably—the members of Shorter's quartet sometimes appear to be circling in the same direction, but in different orbits, until the precise moment where everything converges into remarkable unity. There's an even greater sense of exploration going on this time around, but also a more vivid sense of conjoined interplay—you can feel Perez, Patitucci, and Blade hovering expectantly around Shorter's theme on "Smilin' Through" until, more than six minutes in, Blade suddenly breaks into a powerful groove and everyone comes together, only to fluidly and continually dissolve and reconvene until the tune's end.

In addition to Penn's tune, the quartet tackles Mendelssohn's "On the Wings of a Song," as well as five Shorter compositions—including two tracks from his '88 synth-laden release Joy Ryder, proving that the value of a song is in its essence, not always its treatment.

That Shorter should find a consistent working group in his seventies, able to imbue his often cerebral compositions with a visceral energy and completely unencumbered aesthetic, is proof that the humility to accept there are always new things to learn is paramount to the furtherance of any art. Beyond the Sound Barrier is a major step forward for Shorter, an artist who has always placed potential ahead of pandering and bold ideation ahead of conventional thought.

Smilin' Through; As Far as the Eye Can See; On the Wings of a Song; Tinker Bell; Joy Ryder; Over Shadow Hill Way; Adventures Aboard the Golden Mean; Beyond the Sound Barrier.