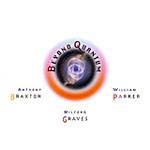 Anthony Braxton has been enjoying a well-deserved resurgence in popularity, courtesy of a growing discography that features collaborations with former students turned rising stars including Taylor Ho Bynum, Mary Halvorson and Jessica Pavone. William Parker has been a galvanizing force in the international scene as key organizer of the Vision Festival, one of today's most important jazz festivals.

In comparison, the legendary Milford Graves is notoriously hermetic. Now a teacher at Bennington College, his days spent supporting Albert Ayler and the New York Art Quartet are long past; he rarely records or plays live. While Braxton and Parker have performed together in the past, this is Graves' first time playing with either, which alone makes this session of historical importance.

The trio operates as a true collective over the course of five lengthy excursions that explore a wide-range of shifting dynamics. Their relentless three-way dialog is a constant evolution of balanced, empathetic interplay.

Despite this democratic vortex of sound, Braxton often rises above the fray. Free of rigid compositional constraints in this loose, unstructured setting, he sounds inspired as he uncoils a vigorous combination of sinuous and staccato phrases in passages that veer from dolorous tranquility to coruscating frenzy.

All-star free jazz sessions often sound better in theory than they do in execution; this meeting however, sounds timeless. Beyond Quantum is an unexpected and magical recording, a classic destined to top many year end lists.