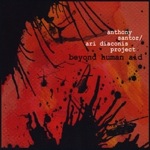 Soul, instrument, listener—the ideal signal flow for free jazz. Sadly, the sound that can sear across a club all too often falters when forced to travel the shorter distance towards a microphone and on to CD. The inherent difficulty—and some might argue irrelevance—of successfully documenting a primarily improvised form, makes successful releases all the more valuable. Beyond Human Aid presents three lengthy, but tempered and focused tracks from a New York-based group led by bassist Anthony Santor and percussionist Ari Diaconis.

The first of these tracks, "Sorcerey and Southern Bells," is plunged forward by guitarist Nick Cassarino's probing strokes of harmony, and teetering, over growing, embryonic rhythm. Drummer Geza Carr and Ari Diaconis on congas effortlessly coax ideas from each other, juxtaposing portions of phased, aggravated battery with tight, clinical interplay, all the while underpinned and indulged by Santor's bass. The sound is quickly dialed into sharp focus by a harmonious and concerted horn solo led by Alex Woslton on trumpet before swiftly dissolving again into an angular, progressive improvisation from Cassarino. Further in, Santor interjects a contrasting solo interlude that is initially haunted by airy horn lines which grow into a much freer, surrealist soundscape. Here the rhythmic and melodic color is power-washed away by a slew of swells and in depth exploration of percussive timbre, only to have this puesdo-calmness distorted, as if one had pressed fast-forward on the rhythm section.

"RAW" must be meant ironically, standing as probably the strongest offering from a compositional and structural viewpoint. The twin alto saxophones of Andy Allen and Bryan McNamara join together in a bold exposition of a theme somewhat reminiscent of the old Police Squad movies, but always with a nod to the avant-garde, ala Bern Nix and John Zorn. Cassarino's deft and percussive interplay with Carr sets up a wild passage of improvisation—the best coming from this stellar partnership—which drift across the boundaries of both the free and traditional jazz vernacular with wantless abandon.

The last and most lengthy track opens with the group dynamic completely reversed. The rhythmic prowess of Diaconis and Carr is brought to the fore against a constantly decaying, but none the less elegant harmonic carousel. The percussive rock-face produced by the duo affords the soloist limitless nooks and crannies—which they make full use of—before transitioning into an innovative rendition of Wayne Shorter's canonical "Footprints".

Beyond Human Aid is a bold release, and certainly achieves its promise of capturing an energetic group in a way previously only conceivable live.

Sorcery and Southern Bells; RAW; With All The Earnestness At Our Command / the goal, right? / Footprints.