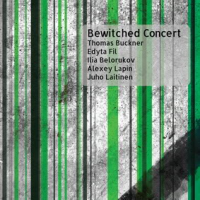 Bewitched Concert was recorded by an international quintet at the Experimental Sound Gallery on November 6th, 2009. The original concept was to record the concert in two sets—the first featuring a flute solo by Edyta Fil, and the second, a group improvisation with Fil, pianist Alexey Lapin and saxophonist Ilia Belorukov. Plans changed when singer Thomas Buckner and cellist Juho Laitinen appeared at the venue. They were invited to join in and took part in the second set.

Buckner sat at the back of the hall for "Part I: Epilogue," but his rich baritone carries through. The power in his voice is resolute as he forges a kinship with the instruments and adds a pertinent dimension to the improvisation, particularly when he sings alongside a convoluted saxophone. The music has an initially spare and ethereal air cast in tandem by Fila and Belorukov, a floating amalgam of linearity that is punctuated by strings before the piano actually gets down to interspersing some notes. But the atmosphere is soon transformed as the improvisations become organic and surge captivatingly with the final lure coming from the classical embrace of the cello.

The other improvisations rack up some interesting group interplay. Bruckner is the anchor on the first, singing in a stark corridor framed by fragmentary group interplay. Belorukov and Fil break out to bring their free-lowing innovations into sharper focus, with Lapin and Latinen lending structure.

The empathy in the band and the ability of the members to extrapolate ideas, even with the last-minute inclusion of Buckner and Laitinen, sustains interest all the way.