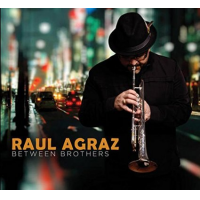 Venezuelan-born and classically trained trumpeter Raul Agraz makes an impressive North American debut with Between Brothers, a vibrant album of Latin-oriented jazz whose harmonic and rhythmic quotients are about as strong and steady as one could wish. As is the case in other contexts these days, the term "brothers" is presumably used in a metaphorical sense, as there appear to be no biological brothers among Agraz's ever-changing group of sidemen that includes a guest appearance on the title song by the renowned clarinetist Paquito D'Rivera. Agraz wrote four of the album's ten numbers and solos, on trumpet or flugelhorn, on every track.

Although twenty-nine musicians (not including D'Rivera and vibraphonist Dave Samuels) are listed on the album jacket, this is hardly a big-band album, as the size of the various ensembles ranges from six to eleven, with Agraz (flugel) and pianist Axel Laugart closing the session with a brief yet amiable duet on Giuseppe Concone's "Concone #6." Technically (and in some other respects), Agraz calls to mind another Latin-born trumpeter of note, Cuba's Arturo Sandoval. He's no clone but the similarities are clearly apparent and shouldn't be glossed over. As for his colleagues, they are thoroughly reliable and well-versed in the rhythmically intense Latin tradition. Besides Agraz and Laugart (who also solo on John Walsh's "Beautiful Diana"), tenor Ivan Renta ("Obsesion"), soprano Dan Willis ("Bossagraz"), guitarist Jake Ezra ("FDB"), and pianists Jon Werking ("A Song for You," "In a Sentimental Day") and Luis Perdomo ("One Day at a Time") are foremost among the improvisers. Samuels, bassist Rodner Padilla and drummer Anderson Quintero share solo space with Agraz (muted) and D'Rivera on the gently swaying "Between Brothers," one of the album's several highlights.

As for the music, it is consistently buoyant and engaging, its melodies tasteful and rhythms bracing, from Pedro Flores' emphatic "Obsesion" through the decorous "Diana." Luis "Papo" Martinez wrote "Between Brothers," Sean McDaniel the sturdy "FDB," Oscar Hernandez the sunny "Sentimiento de Cancion." Agraz, for his part, composed "Bossagraz," "A Song for You," "In a Sentimental Day" and "One Day at a Time," each one a pivotal ingredient in the recipe. For lovers of Latin jazz, a rich and copious feast of irrepressible congeniality and tantalizing rhythms.

Obsesion; Between Brothers; Bossagraz; Song for You (Cancion Para Ti); FDB; On a Sentimental Day; One Day at a Time; Sentimiento de Cancion; Beautiful Diana; Concone #6.