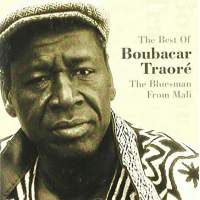 To the extent that bluesmen from Mali have reached worldwide prominence, the leader of the pack is Ali Farka Touré. Partly as a result of his Ry Cooder collaboration Talking Timbuktu, he has attracted a surprisingly large audience.

But close behind is Boubacar Traoré, who was a big radio star in Mali in the '60s. A number of starts and stops in his career (related to family, money, and travel) derailed him along the way, but in 1994 he finally made his first recording. Mariama drew attention to his understated lyricism, and within the next decade four more records followed. Now 61 years old, Traoré has begun to receive the attention he deserves. And thus this compilation, a well-paved road into the master's music.

Like most West African string players, Traoré finds himself deeply rooted in the music of the kora, a harp-like instrument which has been at the center of the region's musical tradition for centuries. It's curious to hear how he adapts the open tonalities of that instrument to his guitar and the blues. The opener, "Bebe Bo Nadero," relies mostly on vocals to maintain its simmering energy. Traoré has that rare sixth sense found only in veteran blues players, knowing how to milk the most emotion out of simple phrases. A few earthy vocal harmonies and some light percussion round out the piece.

One of the songs that made Traoré a national radio star in the '60s was "Mali Twist," borrowed here from a sampler that was never released. Its busy, detailed stop-and-start guitar underpinnings follow a regular cycle and transform the piece into a virtual chant. That makes some sense. "Macire," which comes next, has a strong roadside blues flavor. The unison violin notes that emphasize the melody smoothen out the more rugged tone of Traoré's guitar and voice.

As listeners become more familiar with this material, they will come to understand that the blues convention of the twelve-bar form is but one way of getting to its heart. Boubacar Traoré might not follow this American formula, but he has no trouble communicating the deepest essence of the blues. And that's not a common thing in this small world of ours.

Visit Wrasse Records on the web.