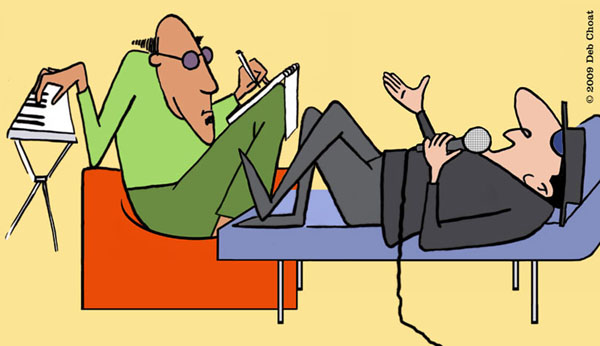 What's with the joke, "More cowbell"? I got to watch a jazz recording session, and the musicians kept saying it to the engineer, then everyone would laugh. Does jazz even use a cowbell? David T., New Orleans

Not all jazz is bucolic, but certainly much of the music on the ECM label fits that description. So, while you might not hear a cowbell in the music of, say, John Coltrane's Impulse years, it would be entirely appropriate in the more pastoral music of Keith Jarrett. For me, his standards trio often evokes imagery of a cow leisurely chewing its cud on a lush green field, its bell gently tolling with the mastication. I've often wondered why Jack DeJohnette doesn't lay down a cowbell groove on some of their tunes, or why Jarrett doesn't expand the group to a quartet, with a dedicated cowbellist. Or cowbeller. Or whatever. He probably just hasn't thought of it, so I'll bet he'd love it if you brought a cowbell to one of his concerts and started jamming along with his solos.

I wrote you in October telling you about my ankle pain, and asking if it might count as enough suffering to make me soulful. Your answer was, "Only if it can't be fully controlled by over-the-counter-medication." That was really helpful, and it sent me on quite a journey.

I tried Advil, Tylenol, Aleve, and traditional aspirin, and none of them helped. Ka-ching! Over-the-counter-medication couldn't control my pain!!! So I got a prescription for Oxycodone, and it didn't help either. I figured I needed to increase the dosage, and my bassist was able to hook me up. Now he also sells me Valium to help me sleep. As it turns out, not only does my ankle still hurt, but my life is unraveling. Might I have soul now? Duane, Detroit

I think you're heading down the right path, but keep in mind that the truly tragic—and soulful—historical figures in jazz would already have added booze to the mix; that's a no-brainer. And don't worry about the warnings on the labels, saying not to mix this medication with that, or with alcohol, or with the operation of heavy machinery. They're written by pharmaceutical lawyers; soulless corporate tools who wouldn't recognize the Blues if it wore a nametag and had a firm handshake.

Soulless Pharmaceutical Tool: "And what company do you work for?"

The Blues: "I don't work for a company. I'm an expression of loss and yearning."

Soulless Pharmaceutical Tool (hiding disappointment): "Ah, well, if you ever need large quantities of labels warning against mixing alcohol and anti-convulsants..." (hands the Blues a business card, heads to the bar for a refill).

And if you want to take it all the way, Duane, why not top off your "soul cocktail" with the most storied self-medication of all—heroin? Jazz lore tells us that no spiritual enema is really complete without it.

Just one note of caution: As I advise all my readers, I recommend you avoid caffeine, red meat, and gluten.

I'm about to travel with my group (a pianist, bassist and drummer), to a gig in a really remote area. I'm wondering: If we somehow get stranded and eventually run out of food—a la the Donner Party—which guy should I eat first? Chuck D., Seattle

You're kidding, right? Because, thankfully, most jazz musicians nowadays are vegetarians. But, okay, let's assume you're one of the carnivore holdouts. Imagine you're at the butcher's, and consider the cut of meat:

Jazz musicians, regardless of instrument, are underfed, overworked, and stressed. One meal off the buffet at a gig (plus whatever they can stuff in their pockets) has to hold them for days. It gives them just enough body mass to lug their heavy gear up steep stairwells, and just enough nourishment to practice frenetically between gigs. They're gaunt, their flesh dry and stringy. As for the taste: Just think about the smell! At best, a rancid commingling of smoke, alcohol and sweat. No amount of hot sauce would make it okay.

By contrast, consider opera divas. Confined to small conservatory practice rooms, trotted out only occasionally for concert hall performances, plumped up to fill out the plus-sized bodices of their costumes, they are the veal of the music world. And they're oh so flavorful, too—always freshly showered, lightly powdered and sweetly perfumed.

If, God forbid, you are forced into cannibalism, don't eat one of your fellow jazz musicians; eat the opera singer. And if you're taking a trip through potentially dangerous terrain, be sure to pack her along with your flashlight, blankets, and potable water.

When I finish a gig with a bunch of other white musicians, we all shake hands like we're just held some freaking corporate board meeting. That's bad enough. But when I play with a group of black guys, I totally dread the end of the gig.

I mean, what are my choices? I can extend my hand in the generic white guy way, but then I feel like "The Man," like I'm making them play by the stupid rules of our dominant white corporate culture. But, on the other hand, if I try to celebrate their way, I feel like a poser, like I'm pretending to be a "bro," and I wonder if maybe that's even worse. Plus, they keep changing the code. I mean, I'll go for the curled-finger-grab-into-simultaneous-finger-snap move, and they'll be waiting to bump shoulders. Then I try to bump shoulders and they're expecting the fist bump. It's totally embarrassing, and sometimes I even lose my balance.

H-U-U-T-T! What would you do if I told you there's already a model of racial unity that could be easily adapted to the jazz world? Well, there is! And it's right in front of you—broadcast nationally all day Sunday and every Monday night! Better yet, it's rendered with impeccable camera work that zooms in on every nuance, all the better for you to study. Of course I'm speaking about the world of football, where team camaraderie totally transcends racial division.

What are the jazz etiquette lessons of football, reinforced by instructional instant replays and slow motion highlights? They're surprisingly simple, and totally applicable: After each tune, you can celebrate with a band mate by swatting him on the butt, jumping in the air and bumping his chest, or simply headbutting him. Following an especially athletic lick, you can tackle him and roll around the stage in shared ecstasy. And at the end of a successful gig, the entire band can writhe around on stage together.

If you're not a sports fan, you might consider the more passive European model—a light kiss on each cheek. But neither solution will work unless you're completely free of intimacy issues. That's another area where you could take your lead from football players—they're just as comfortable in tight-quarter group showers as they are in televised embraces. How do they do it? I give a lot of the credit to their coaches, and you might consider hiring one to work with your group. Under his caring guidance, you and your bandmates—like your gridiron counterparts—can overcome personal boundaries and become more emotionally available to one another. Hey, maybe he'll even tell you where you can get matching, skin-tight uniforms. H-U-U-T-T-T!!!

I can't figure out what jazz artists are thinking when they play a piece by one of the Great American Songbook composers like Gershwin or Porter. It sounds to me like they play it correctly, then they go crazy for five or ten minutes, then they play it correctly again. That's two minutes of good music surrounding a much longer bout of insanity, and for me it's really not worth it. Am I missing something? Melody, Please!

Well, like that poet, composers of the Great American Songbook are all—for lack of a better word—dead. And jazz artists happen to be a highly reverential lot. Each performance of a "standard" is, in fact, a musical eulogy. The musicians start with a solemn reading, interpreting the dead composer's melody, sticking respectfully close to it. Then they improvise, spinning original lines within the dead composer's form and harmony. This "insanity," as you call it, is actually the jazz artists' genius, and there could be no deeper, more heartfelt testimonial to the dead composer. Some jazz musicians are so moved by the dead composer's death that they solo for twenty minutes or longer, screeching and honking with animal noises from deep within, channeling the bereft widow's heart-wrenching wail as the dead composer's casket was lowered into the earth many years ago.

Once the outpouring is complete and catharsis achieved, the artists then conclude, more soberly, with a restatement of the dead composer's melody; a final heartfelt tribute. It's all really very simple, if a bit morbid.

Accompanying 101, For Your Consideration, Bandstand Violence