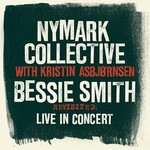 Nymark Collective is a Norwegian quartet founded in 1998 by trumpeter Kare Nymark jr. together with two of ECM label rising stars, pianist Tord Gustavsen and bassist Mats Eilertsen, augmented by drummer Kenneth Ekornes. In 2005 the quartet was asked, by the prestigious Molde Jazz Festival, to present a program with vocalist Kristin Asbjornsen, known for her brilliant performances of spirituals on Wayfaring Stranger: A Spiritual Songbook (Universal Music Norway, 2006) as well for her score for the film about poet Charles Bukowsky, Factotum (Milan Records, 2006).

From this collaboration was born this tribute to the Empress of the Blues, Bessie Smith. The nine songs and one instrumental were recorded live at the Cosmpolite club in Oslo and in Natjazz Festival in Bergen last May (2007), a hundred years after Smith's premature death. The casting of Asbjornsen as interpreter of Smith's legacy is brilliant, even tough Asbjornsen is not attempting to update Smith's performances. But, like Smith, Asbjornsen has a natural charisma and a rich voice. Her suggestive and idiomatic delivery easily casts its spell, with a unique sensitivity and elegant phrasing that captures the pre-Depression street wisdom of Smith and her emotional intelligence, but doesn't surrender to former interpretations of these blues and jazz standards.

It is also encouraging to realize that the musical personalities of Gustavsen and Eilertsen are much more colorful and varied than the ones presented through their slow, half-tempo ECM releases. Gustavsen surprises as one who can groove hard, and Eilertsen clearly enjoys taking the walking bass role, most beautifully on "Don't Cry Baby," his duet with Asbjornsen. Nymark Jr. is well-versed with the early tradition of swing jazz, and his soulful and singing tone often sound as if he were paying tribute to Louis Armstrong, especially when he uses his mute.

But it is Asbjornsen who is spellbinding with her wise and emotional performances. Her vocal can sound vulnerable and fragile, sentimental or pessimistic, but always conveys a compassionate faith in oneself that never reconciles with the daily burdens of life—just as the great Smith—and the rousing and playful performance of the gospel "Mourn You Mourners" perfectly sums up this attitude. Asbjornsen's interpretation of "The Devil's Gonna Get You" and the spare delivery of the classic Depression-era anthem, "Nobody Knows You When You're Down and Out," are quite reserved, as if knowing that there is no need to charge them with more than a thoughtful reading of the words. Her duet with Gustavsen on the traditional spiritual "Mam'selle Marie" succeeds to transcend this beautiful song into a modern, abstract plea for salvation.

The fantastic Bessie Smith Revisited is an independent release that doesn't deserve to slip under the radar; it is, in fact, truly one of the greatest of 2008.

The Devil's Gonna Get You; Aggravatin' Papa; Oh Daddy Blues; Nobody Knows You When You're Down And Out; Don't Cry Baby; Today; Interlude; Mam'selle Marie; Mourn You Mourners; Baby Won't You Please Come Home.