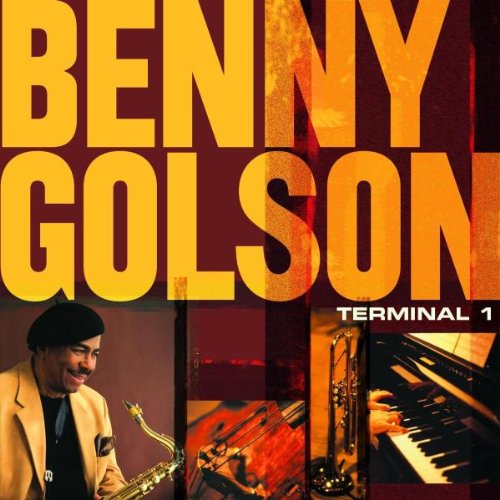 Benny Golson is indisputably a fine tenor saxophonist, but at the end of his already long career he will probably be best remembered for the quality and breadth of his songwriting. His compositions have run the gamut, from scores for television and film to jazz standards such as “Killer Joe” and the bittersweet dirge “I Remember Clifford;” and with the exception of this last, they are often more memorable than the projects or events that occasioned them.

Terminal 1 , Golson’s Concord Records debut and something like his 35th full-length, derives its name and impetus from the forthcoming Steven Spielberg film The Terminal in which the veteran jazzman has a cameo role. Even without having seen the movie (and please forgive me any undue pessimism toward Hollywood), chances are that this album won’t buck the existing trend.

Like Max Roach, Clark Terry, Dave Brubeck and all the other septua- and octogenarians of the jazz scene, Golson’s own performances on his latest album are undiminished by his 75 years. His tone is mellow and elegant. His phrasing and solos are confident, lithe, never ostentatious. And his songwriting, as evidenced here on the fruity original “Caribbean Drifting,” is in equally good form. (“Our Last Goodbye,” the other Golson original, doesn’t appear to be destined for the final release, though it appears on the advance disc. If for some reason it doesn’t make the cut, collectors ought to hunt this modest ballad down.)

To his credit, Golson has also assembled a capable supporting quartet. Of them, it is trumpeter Eddie Henderson who shines. His sound here is warm, golden: the color and mood of dusk. His playfulness and agility at times recall Clark Terry, and for Henderson, any step away from Miles is a step in the right direction. (The trumpeter’s noteworthy performance on tracks like “Killer Joe” and “In Your Own Sweet Way” is even more of a delight when compared to his dull outing as leader on So What , which appeared last year on Columbia/Eighty-Eight’s.)

Drummer Carl Allen makes good use of his time in the spotlight on both the intro and the outro to the title track, while pianist Mike LeDonne subtly bends the vamp of “Killer Joe” and strategically picks his chords to underpin the first of Golson’s and Henderson’s solos before taking a sparkling one himself. Unfortunately, Buster Williams and his bass get short shrift on most tracks, as if it’s been muted in the mix. He leads the quintet into Maceo Pinkard’s “Sweet Georgia Brown” and urges the tune forward from then on; but even here it takes some fiddling with the equalizer to bring him into proper focus.

Terminal 1 is a solid, engaging album, full of some lively ensemble work and a showcase of new interpretations of familiar Golson songs next to at least one fresh chart and the two older standards, including Don Redman’s “Cherry.” It’s hardly a matter of settling for whatever Golson happens to be offering on account of his notoriety or his age. While Terminal 1 benefits from his experience, it’s as expressive and buoyant as anything Golson was doing with Blakey’s Jazz Messengers lineup fifty years ago.