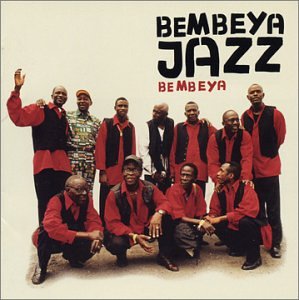 Some time around bebop's coming of age, jazz morphed from a popular music of dance and song into a rarified art form. Critics and historians can debate the details, but the bottom line is that the music went through a tremendous shift in its audience. They began to listen more and dance less. The challenge that faced jazz after its institutionalization (and perhaps the biggest one it still faces) was how to get back in touch with ordinary people. This has been accomplished to varying extents through fusions with funk, rock, and other popular styles.

In West Africa, jazz never had anything to do with purity. During the '60s and '70s, the language of improvisation found a place in hotbeds like Ghana and Nigeria, integrating itself within a context of traditional song and dance, accompanied by other styles from Europe and the New World. Three bands which stood tall during the climax of Afro-pop — Orchestra Baobab , Super Rail Band, and Bembeya Jazz — have all recently revived themselves in order to release brand new records and let the world their music never died. It just took a nap.

Bembeya Jazz, named after the river of the same name in Guinea, makes its comeback in the form of a twelve-piece group with the most unusual front line of three horns and four guitars. The tunes on Bembeya all project a message, whether it be respecting the power of sorcery, celebrating the beauty of a young girl, drumming for a friend, or acknowledging the omnipresent nature of change. (Listeners be warned: these messages are not sung in English.) To Western ears, these ideas may sound feminine—and indeed, if our stereotypes are true in West Africa, then it's a very girly place. Whatever. No women in this band.

Four sprightly guitars cutting back and forth across the beat reinforce the sort of light pulse that both supports the music and opens space for singers and soloists. Sekou "Diamond Fingers" Diabaté, griot by descent and guitarist by choice, takes a lead role as soloist, uttering sharp unison lines on "A Koukou We," fluttering off in runs and trills, only to return to balanced counterpoint. He also arranges these pieces, which run the gamut from the light ballad "Yelema Yelemaso" (with Hawaiian slide guitar) to the perky Cubanized title track, the heady Afro-beat of "Sanfaran," and the neo disco-funk of "Sabou." The horns get their share of bright arranged heads, with relatively brief solos serving as interludes between vocal passages.

In the grand tradition of African big bands, there is but one imperative: dance. Preferably all night long. Don't spend too much time thinking about Bembeya. That's really not the point.

Visit Bembeya Jazz on the web. The group is currently touring North America.