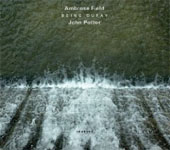 In a time when musical boundaries are being dissolved and labels are becoming increasingly meaningless, innovation can be found everywhere. When The Hilliard Ensemble collaborated with Norwegian Jan Garbarek on Officium (ECM, 1994) and the follow-up Mnemosyne (ECM, 1999), who knew that the combination of vocal music, ranging from pre-AD Greece to contemporary times, would mesh so beautifully with the legendary saxophonist's soaring improvisations? In the decade since, the emergence of composers who use electronics as their exclusive (but, by nature, infinite) palette—sampling for later use and in real time—has created a growing body of multidisciplinary work that continues to stretch preconception. With Being Dufay, released on ECM's classical New Series imprint, the label has taken another intrepid step into brave new world where processed and found sounds mesh seamlessly with musical fragments from the 15th Century to create one of the most hauntingly beautiful records of the year.

Composer Ambrose Field uses live and studio electronics to reshape the music of the little-known Guillaume Dufay (1397-1474) into fuller constructs, albeit ones that often sound not of this world. Celestial sonics—owing in no small part to the innovations of artists like Brian Eno—turn tenor (and ex-Hilliard Ensemble member) John Potter's plaintive and deeply expressive interpretations of Dufay's largely linear music into something altogether new. For those who feel that electronic music is inherently cold and lifeless, Field's music that wraps around Dufay's melancholic "Je me complains" is as resonant and evocative as any created with conventional instrumentation. From stark soundscapes based around a single pedal point to heavenly choral samples that lead into a lushly dramatic three-chord change that places Potter's processed vocal back in the mix before returning to a starker ending with Potter the dominant voice, this is music created by the heart as much as the mind.

Field and Potter assert that all music lives and breathes, and can be grist for new and creative reinterpretation. On the lengthy title track, Field and Potter create an ethereal soundscape of jagged textures and softer melodies. Like plainchant, Potter's primary melody is monophonic, without measured rhythm, allowing him greater interpretive freedom, even as Field layers Potter's own voice and an array of other sonorities to create an aural landscape best experienced rather than simply heard. Throughout the 12 minutes, Potter's clear voice emerges as a kind of focal point, around which Field's combination of musical and found sounds create an expansive sense of space, meant to create a sense of scale not unlike, as he writes in the liner notes, "a human figure...introduced into a vast architectural scene for measurement purposes."

If any of this sounds unapproachable, it isn't. All that's required, when listening to Field and Potter, are an ear and mind open to any and all possibilities. With Being Dufay they've shaped a classic contemporary work, placing music on a timeless continuum of in perpetuity existence.