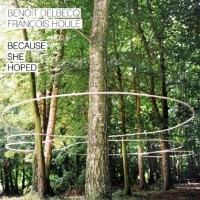 The superior recording quality, tinged with reverb and a capacious aesthetic, serves as a third instrument on this studio recording by French pianist Benoit Delbecq and Canadian clarinetist Francois Houle. Both artists occupy that progressive, cutting-edge space within modern jazz contexts. With their third duo outing, the musicians use extended techniques in an intimate setting. Here, unorthodox treatments coalesce with sublime dialogues, spiking breakouts and melodic intervals, all executed with a sense of intimacy.

Ethereal, and at times economical in scope, the duo exercises rhythmic tapping maneuvers and other extraneous sounds often centered on fragile underpinnings. Delbecq's "Ando," depicts a prominent example of the artists' innovative tendencies. It recalls abstract world music interspersed with lush and quaintly stated melodies, as Delbecq plucks the piano strings in a cyclical manner where the illusion of an additional percussion instrument comes to fruition. However, these largely introspective dialogues feature Houle's whirling notes and Delbecq's understated block chords that conjure dreamlike effects, often propelled by unusual digressions and intervallic leaps.

Aided by whispery sub-themes, the musicians seemingly interrogate each other's souls during the variable processes. The overall program differs from the customary or boilerplate-like jazz duo undertaking, with the instrumentalists imparting an idiosyncratic stylization with enigmatic nuances, to complement a rather sanctified rite of passage.