Beats and the Boppers: Playing The Word and A Few Incidences 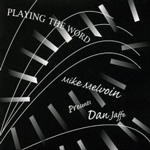 Here's a throwback to another era—when the Beats and the boppers first teamed up. It has the feel of recordings of Kenneth Rexroth and San Francisco poets like Lawrence Ferlinghetti. What's different is that it's not such a novelty to have a musician and a poet together and so the two find a better balance, often sounding as if they're simply playing duets.

Jaffe has lived in New York and Kansas City and in times when those cities were rich with jazz and jazz musicians. Pulitzer Prize winner James Tate called Jaffe's poems "so vivid and passionate I could hear the tunes and see the smoke. In reading his works—in a voice that to these ears suggests, in an appealing way, Leonard Nimoy as Spock—Jaffe manages to combine impeccable 'swinging' timing with an almost rabbinic fervor. Bird and Basie show up here as does Langston Hughes; it's not name-dropping but the colors and feelings of a jazz lover who has been around long enough to hear these players and to be able to reflect on how they enrich his poetry and his life.

Mike Melvoin is not Jaffe's accompanist but his partner. Melvoin knows enough styles and vocabulary to channel effectively different eras and musicians to complement beautifully the poetry. In several cases, he plays actual bits of music from a period -Duke's "Take the A Train or Birds' "Scrapple from the Apple -but these are merely used to launch into more personal expressions from both men. The lovely waltz "Notes from the Williamsburg calls up images of Sonny Rollins' contemplations there but is itself a beautiful meditation on space and time. An emotional centerpiece is "Bird Talk , an extended fanciful flight that paints a soulful picture of the emotional core of Parker's life and improvisations. 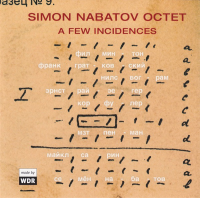 Jazz and poetry collide in a much more dramatic and daunting way on this recording by staggeringly gifted Russian pianist Simon Nabatov, always challenging himself and listeners by working on the borders of jazz, classical and improvised musics.

Nabatov takes as his launching point the surreal and often violent poetry of Daniil Kharms, one of many victims of the Soviet State under Stalin. For Nabatov, Kharms symbolizes the artist who resists all that is conventional and, in particular, the apparatus of the state. It is the third of the pianist's settings of Russian writers—he's also done Brodsky and Nabokov—and he once again finds a personal and adventurous way to 'interpret' the text. The poet here is voiced by the inimitable Phil Minton, who uses a vast array of vocal techniques to enrich his reading of the poetry. Together with what was formally nature Morte -also including Nils Wogram and Frank Gratkowski -Nabatov marshals the forces of cello, bass, drums and live electronics. The music ranges from raucous to meditative with a world of emotional states in between. The players combine in different groupings and constantly suggest a sense of inventive playfulness even when the poetry is troubled. A revelation is "The Start of a Very Nice Summer's Day , on which out of a brooding and ominous introduction blooms a haunting and pointed ballad. The band plays in unison and is then joined by Minton speaking Kharms' ironic text. As Stuart Broomer suggests in his notes, Nabatov's music makes vital and necessary the beauty in the darkness.